Adventures in the Rifle Brigade, in the Peninsula, France, and the Netherlands from 1809 to 1815 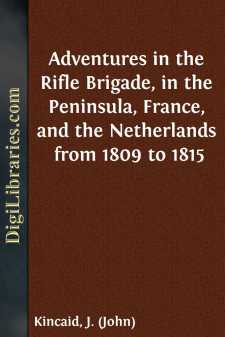 I joined the second battalion rifle brigade, (then the ninety-fifth,) at Hythe-Barracks, in the spring of 1809, and, in a month after, we proceeded to form a part of the expedition to Holland, under the Earl of Chatham.

With the usual Quixotic feelings of a youngster, I remember how very desirous I was, on the march to Deal, to impress the minds of the natives with a suitable notion of the magnitude of my importance, by carrying a donkey-load of pistols in my belt, and screwing my naturally placid countenance up to a pitch of ferocity beyond what it was calculated to bear.

We embarked in the Downs, on board the Hussar frigate, and afterwards removed to the Namur, a seventy-four, in which we were conveyed to our destination.

I had never before been in a ship of war, and it appeared to me, the first night, as if the sailors and marines did not pull well together, excepting by the ears; for my hammock was slung over the descent into the cockpit, and I had scarcely turned-in when an officer of marines came and abused his sentry for not seeing the lights out below, according to orders. The sentry proceeded to explain, that the middies would not put them out for him, when the naked shoulders and the head of one of them, illuminated with a red nightcap, made its appearance above the hatchway, and began to take a lively share in the argument. The marine officer, looking down, with some astonishment, demanded, "d—n you, sir, who are you?" to which the head and shoulders immediately rejoined, "and d—n and b—t you, sir, who are you?"

We landed on the island of South Beeveland, where we remained about three weeks, playing at soldiers, smoking mynheer's long clay pipes, and drinking his vrow's butter-milk, for which I paid liberally with my precious blood to their infernal musquitos; not to mention that I had all the extra valour shaken out of me by a horrible ague, which commenced a campaign on my carcass, and compelled me to retire upon Scotland, for the aid of my native air, by virtue of which it was ultimately routed.

I shall not carry my first chapter beyond my first campaign, as I am anxious that my reader should not expend more than his first breath upon an event which cost too many their last.

Rejoin the Regiment. Embark for the Peninsula. Arrival in the Tagus. The City of Lisbon, with its Contents. Sail for Figuera. Landing extraordinary. Billet ditto. The City of Coimbra. A hard Case. A cold Case, in which a favourite Scotch Dance is introduced. Climate. The Duke of Wellington.

I rejoined the battalion, at Hythe, in the spring of 1810, and, finding that the company to which I belonged had embarked, to join the first battalion in the Peninsula, and that they were waiting at Spithead for a fair wind, I immediately applied, and obtained permission, to join them.

We were about the usual time at sea, and indulged in the usual amusements, beginning with keeping journals, in which I succeeded in inserting two remarks on the state of the weather, when I found my inclination for book-making superseded by the more disagreeable study of appearing eminently happy under an irresistible inclination towards sea-sickness....