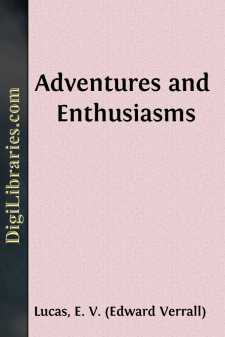 There are certain qualities that we all claim. We are probably wrong, of course, but we deceive ourselves into believing that, short as we may fall in other ways, we really can do this or that superlatively well. "I'll say this for myself," we remark, with an approving glance in the mirror, "at any rate I'm a good listener"; or, "Whatever I may not be, I'm a good host." These are things that may be asserted of oneself, by oneself, without undue conceit. "I pride myself on being a wit," a man may not say; or "I am not ashamed of being the handsomest man in London;" but no one resents the tone of those other arrogations, even if their truth is denied.

It is less common, although also unobjectionable, to hear people felicitate with themselves on being good guests. Indeed, I have lately met two or three who quite impenitently asserted the reverse; and I believe that I am of their company. Trying very hard to be good I can never lose sight of the fact that my host's house is not mine. Fixed customs must be surrendered, lateness must become punctuality, cigarette ends must not burn the mantelpiece, one misses one's own China tea. The bathroom is too far and other people use it. There is no hook for the strop. In short, to be a really good guest and at ease under alien roofs it is necessary, I suspect, to have no home ties of one's own; certainly to have no very tyrannical habits.

I cut recently from the Spectator this rhymed analysis of the perfect guest:

She answered, by return of post,The invitation of her host;She caught the train she said she would,And changed at junctions as she should;She brought a small and lightish box,And keys belonging to the locks.Food, rare and rich, she did not beg,But ate the boiled or scrambled egg;When offered lukewarm tea she drank it,And did not crave an extra blanket,Nor extra pillows for her head;She seemed to like the spare-room bed.She brought her own self-filling pen,And always went to bed at ten.She left no little things behind,But stories new and gossip kind.

Those verses seem to me to cover the ground, although one might want a change here and there. For example, would a little spice of malice in her anecdotage be so undesirable? And a little less meekness in the lady, who comes out rather as a poor relation, might do no harm. They also might emphasize the point that she was never indisposed, for it is an unpardonable offence in a guest to be ill; that she spent a great deal of time in writing letters (which all hostesses like their guests to do); and that on returning home she sat down and composed a "roofer" in the warmest possible terms. They might touch lightly but feelingly on her readiness not only to eat what was offered, and not to desire luxuries, but to refuse the rarities, such as, in recent times, bacon and butter and sugar. ("Oh, no, I never take butter!"—what grateful words to fall on a hostess's ear!) One would not, however, have one's guest a vegetarian, because that way distraction lies....