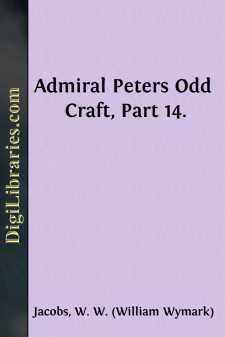 Mr. George Burton, naval pensioner, sat at the door of his lodgings gazing in placid content at the sea. It was early summer, and the air was heavy with the scent of flowers; Mr. Burton's pipe was cold and empty, and his pouch upstairs. He shook his head gently as he realised this, and, yielding to the drowsy quiet of his surroundings, laid aside the useless pipe and fell into a doze.

He was awakened half an hour later by the sound of footsteps. A tall, strongly built man was approaching from the direction of the town, and Mr. Burton, as he gazed at him sleepily, began to wonder where he had seen him before. Even when the stranger stopped and stood smiling down at him his memory proved unequal to the occasion, and he sat staring at the handsome, shaven face, with its little fringe of grey whisker, waiting for enlightenment.

"George, my buck," said the stranger, giving him a hearty slap on the shoulder, "how goes it?" "D—- Bless my eyes, I mean," said Mr. Burton, correcting himself, "if it ain't Joe Stiles. I didn't know you without your beard."

"That's me," said the other. "It's quite by accident I heard where you were living, George; I offered to go and sling my hammock with old Dingle for a week or two, and he told me. Nice quiet little place, Seacombe. Ah, you were lucky to get your pension, George."

"I deserved it," said Mr. Burton, sharply, as he fancied he detected something ambiguous in his friend's remark.

"Of course you did," said Mr. Stiles; "so did I, but I didn't get it. Well, it's a poor heart that never rejoices. What about that drink you were speaking of, George?"

"I hardly ever touch anything now," replied his friend.

"I was thinking about myself," said Mr. Stiles. "I can't bear the stuff, but the doctor says I must have it. You know what doctors are, George!"

Mr. Burton did not deign to reply, but led the way indoors.

"Very comfortable quarters, George," remarked Mr. Stiles, gazing round the room approvingly; "ship-shape and tidy. I'm glad I met old Dingle. Why, I might never ha' seen you again; and us such pals, too."

His host grunted, and from the back of a small cupboard, produced a bottle of whisky and a glass, and set them on the table. After a momentary hesitation he found another glass.

"Our noble selves," said Mr. Stiles, with a tinge of reproach in his tones, "and may we never forget old friendships."

Mr. Burton drank the toast. "I hardly know what it's like now, Joe," he said, slowly. "You wouldn't believe how soon you can lose the taste for it."

Mr. Stiles said he would take his word for it. "You've got some nice little public-houses about here, too," he remarked. "There's one I passed called the Cock and Flowerpot; nice cosy little place it would be to spend the evening in."

"What's the matter with him?" inquired his friend, anxiously.

Mr. Stiles threw himself back in his chair and eyed him with amazement....