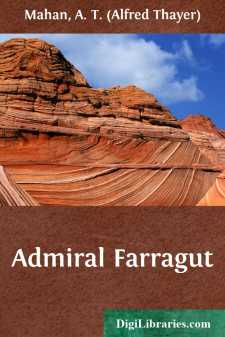 Add to My Favorites
Published: 11 years ago
Downloads: 15
Rating: (0 Votes)

The father of Admiral Farragut, George Farragut, was of unmixed Spanish descent, having been born on the 29th of September, 1755, in the island of Minorca, one of the Balearic group, where the family had been prominent for centuries. One of his ancestors, Don Pedro Ferragut, served with great distinction under James I, King of Aragon, in the wars against the Moors, which resulted in their expulsion from Majorca in 1229, and from the kingdom of Valencia, in the Spanish Peninsula, in 1238. As Minorca in 1755 was a possession of the British Crown, to which it had been ceded in 1713 by the Treaty of Utrecht, George Farragut was born under the British flag; but in the following year a French expedition, fitted out in Toulon, succeeding in wresting from the hands of Great Britain both the island and its excellent fortified harbor, Port Mahon, one of the most advantageous naval stations in the Mediterranean. It was in the course of the operations which resulted in this conquest of Minorca by the French that the British fleet, under the command of Admiral Byng, met with the check for which the admiral paid the penalty of his life a few months later. At the close of the Seven Years' War, in 1763, the island was restored to Great Britain, in whose hands it remained until 1782, when it was again retaken by the French and Spaniards.

George Farragut, however, had long before severed his connection with his native country. In March, 1776, he emigrated to North America, which was then in the early throes of the Revolutionary struggle. Having grown to manhood a subject to Great Britain, but alien in race and feeling, he naturally espoused the cause of the colonists, and served gallantly in the war. At its end he found himself, like the greater part of his adopted countrymen, called to the task of building up his own fortunes, neglected during its continuance; and, by so doing, to help in restoring prosperity to the new nation. A temper naturally adventurous led him to the border lines of civilization; and it was there, in the region where North Carolina and eastern Tennessee meet, that the years succeeding the Revolution appear mainly to have been passed. It was there also that he met and married his wife, Elizabeth Shine, a native of Dobbs County, North Carolina, where she was born on the 7th of June, 1765. At the time of their marriage the country where they lived was little more than a wilderness, still infested by Indians; and one of the earliest recollections of the future admiral was being sent into the loft, on the approach of a party of these, while his mother with an axe guarded the door, which she had barricaded. This unsettled and dangerous condition necessitated a constant state of preparedness, with some organization of the local militia, among whom George Farragut held the rank of a major of cavalry, in which capacity he served actively for some time.

While resident in Tennessee, George Farragut became known to Mr. W. C. C. Claiborne, at that time the member for Tennessee in the National House of Representatives. Mr. Claiborne in 1801 became governor of Mississippi Territory; and in 1803, when the United States purchased from France the great region west of the Mississippi River, to which the name Louisiana was then applied, he received the cession of the newly acquired possession. This was soon after divided into two parts by a line following the thirty-third parallel of north latitude, and Claiborne became governor of the southern division, which was called the Territory of Orleans. To this may probably be attributed the removal of the Farraguts to Louisiana from eastern Tennessee. The region in which the latter is situated, remote both from tide-water and from the great river by which the Western States found their way to the Gulf of Mexico, was singularly unfitted to progress under the conditions of communication in that day; and it long remained among the most backward and primitive portions of the United States. The admiral's father, after his long experience there, must have seen that there was little hope of bettering his fortunes....