Addresses on the Revised Version of Holy Scripture 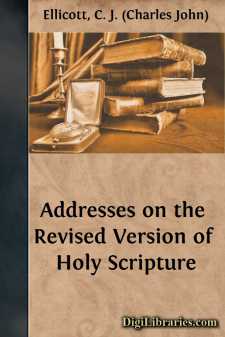 As there now seem to be sufficient grounds for thinking that ere long the Revised Version of Holy Scripture will obtain a wider circulation and more general use than has hitherto been accorded to it, it seems desirable that the whole subject of the Revised Version, and its use in the public services of the Church, should at last be brought formally before the clergy and laity, not only of this province, but of the whole English Church.

The revision of the Authorised Version has thus been in the hands of the English-speaking reader sixteen years, in the case of the Canonical Scriptures, and five years in the case of the Apocrypha—periods of time that can hardly be considered insufficient for deciding generally, whether, and to what extent, the Revised Version should be used in the public services of the Church.

I have thus thought it well, especially after the unanimous resolution of the Upper House of the Convocation of Canterbury, three years ago , and the very recent resolution of the House of Laymen, to place before you the question of the use of the Revised Version in the public services of the Church, as the ultimate subject of this charge.  I repeat, as the ultimate subject, for no sound opinion on the public use of this version can possibly be formed unless some general knowledge be acquired, not only of the circumstances which paved the way for the revision of the time-honoured version of 1611, but also of the manner in which the revision was finally carried out.  We cannot properly deal with a question so momentous as that of introducing a revised version of God’s Holy Word into the services of the Church, without knowing, at least in outline, the whole history of the version which we are proposing to introduce.  This history then I must now place before you from its very commencement, so far as memory and a nearly life-long connexion with the subject enable me to speak.

The true, though remote fountain-head of revision, and, more particularly, of the revision of the New Testament, must be regarded as the grammar written by a young academic teacher, George Benedict Winer, as far back as 1822, bearing the title of a Grammar of the Language of the New Testament.  It was a vigorous protest against the arbitrary, and indeed monstrous licence of interpretation which prevailed in commentaries on Holy Scripture of the eighteenth and nineteenth centuries.  It met with at first the fate of all assaults on prevailing unscientific procedures, but its value and its truth were soon recognized.  The volume passed through several successively improved editions, until in 1855 the sixth edition was reached, and issued with a new and interesting preface by the then distinguished and veteran writer.  This edition formed the basis of the admirable and admirably supplemented translation of my lamented and highly esteemed friend Dr. Moulton, which was published in 1870, passed through a second edition six years afterwards, and has, since that time, continued to be a standard grammar, in an English dress, of the Greek Testament down to this day....