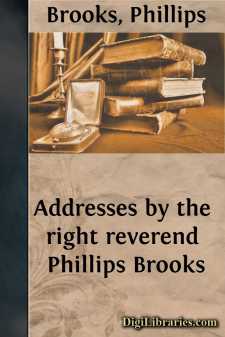 I. THE BEAUTY OF A LIFE OF SERVICE.

I should like to read to you again the words of Jesus from the 8th chapter of the Gospel of St. John:—

"Then said Jesus to those Jews which believed on Him, if ye continue in My word, then are ye My disciples indeed; and ye shall know the truth, and the truth shall make you free. They answered him, We be Abraham's seed, and were never in bondage to any man; how sayest Thou, ye shall be made free? Jesus answered them, Verily, verily, I say unto you, whosoever committeth sin is the servant of sin. And the servant abideth not in the house forever, but the Son abideth ever. If the Son, therefore, shall make you free, ye shall be free indeed."

I want to speak to you to-day about the purpose and the result of the freedom which Christ gives to His disciples and the freedom into which man enters when he fulfils his life. The purpose and result of freedom is service. It sounds to us at first like a contradiction, like a paradox. Great truths very often present themselves to us in the first place as paradoxes, and it is only when we come to combine the two different terms of which they are composed and see how it is only by their meeting that the truth does reveal itself to us, that the truth does become known. It is by this same truth that God frees our souls, not from service, not from duty, but into service and into duty, and he who makes mistakes the purpose of his freedom mistakes the character of his freedom. He who thinks that he is being released from the work, and not set free in order that he may accomplish that work, mistakes the Christ from whom the freedom comes, mistakes the condition into which his soul is invited to enter. For if I was right in saying what I said the other day, that the freedom of a man simply consists in the larger opportunity to be and to do all that God makes him in His creation capable of being and doing, then certainly if man has been capable of service it is only by the entrance into service, by the acceptance of that life of service for which God has given man the capacity, that he enters into the fulness of his freedom and becomes the liberated child of God. You remember what I said with regard to the manifestations of freedom and the figures and the illustrations, perhaps some of them which we used, of the way in which the bit of iron, taken out of its uselessness, its helplessness, and set in the midst of the great machine, thereby recognizes the purpose of its existence, and does the work for which it was appointed, for it immediately becomes the servant of the machine into which it was placed. Every part of its impulse flows through all of its substance, and it does the thing which it was made to do. When the ice has melted upon the plain it is only when it finds its way into the river and flows forth freely to do the work which the live water has to do that it really attains to its freedom. Only then is it really liberated from the bondage in which it was held while it was fastened in the chains of winter. The same freed ice waits until it so finds its freedom, and when man is set free simply into the enjoyment of his own life, simply into the realization of his own existence, he has not attained the purposes of his freedom, he has not come to the purposes of his life....