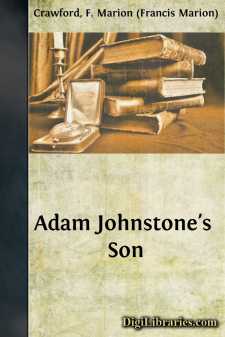 “I sometimes think that one’s past life is written in a foreign language,” said Mrs. Bowring, shutting the book she held, but keeping the place with one smooth, thin forefinger, while her still, blue eyes turned from her daughter’s face towards the hazy hills that hemmed the sea thirty miles to the southward. “When one wants to read it, one finds ever so many words which one cannot understand, and one has to look them out in a sort of unfamiliar dictionary, and try to make sense of the sentences as best one can. Only the big things are clear.”

Clare glanced at her mother, smiling innocently and half mechanically, without much definite expression, and quite without curiosity. Youth can be in sympathy with age, while not understanding it, while not suspecting, perhaps, that there is anything to understand beyond the streaked hair and the pale glance and the little torture-lines which paint the portrait of fifty years for the eyes of twenty.

Every woman knows the calendar of her own face. The lines are years, one for such and such a year, one for such and such another; the streaks are months, perhaps, or weeks, or sometimes hours, where the tear-storms have bleached the brown, the black, or the gold. “This little wrinkle—it was so very little then!” she says. “It came when I doubted for a day. There is a shadow there, just at each temple, where the cloud passed, when my sun went out. The bright hair grew lower on my forehead. It is worn away, as though by a crown, that was not of gold. There are hollows there, near the ears, on each side, since that week when love was done to death before my eyes and died—intestate—leaving his substance to be divided amongst indifferent heirs. They wrangle for what he has left, but he himself is gone, beyond hearing or caring, and, thank God, beyond suffering. But the marks are left.”

Youth looks on and sees alike the ill-healed wounds of the martyrdom and the rough scars of sin’s scourges, and does not understand. Clare Bowring smiled, without definite expression, just because her mother had spoken and seemed to ask for sympathy; and then she looked away for a few moments. She had a bit of work in her hands, a little bag which she   was making out of a piece of old Italian damask, to hold a needle-case and thread and scissors. She had stopped sewing, and instinctively waited before beginning again, as though to acknowledge by a little affectionate deference that her mother had said something serious and had a right to expect attention. But she did not answer, for she could not understand.

Her own young life was vividly clear to her; so very vividly clear, that it sometimes made her think of a tiresome chromolithograph. All the facts and thoughts of it were so near that she knew them by heart, as people come to know the patterns of the wall-paper in the room they inhabit. She had nothing to hide, nothing to regret, nothing which she thought she should care very much to recall, though she remembered everything. A girl is very young when she can recollect distinctly every frock she has had, the first long one, and the second, and the third; and the first ball gown, and the second, and no third, because that is still in the future, and a particular pair of gloves which did not fit, and a certain pair of shoes she wore so long because they were so comfortable, and the precise origin of every one of the few trinkets and bits of jewellery she possesses. That was Clare Bowring’s case. She could remember everything and everybody in her life. But her father was not in her memories, and there was a little motionless   grey cloud in the place where he should have been. He had been a soldier, and had been killed in an obscure skirmish with black men, in one of England’s obscure but expensive little wars. Death is always very much the same thing, and it seems unfair that the guns of Balaclava should still roar “glory” while the black man’s quick spear-thrust only spells “dead,” without comment....