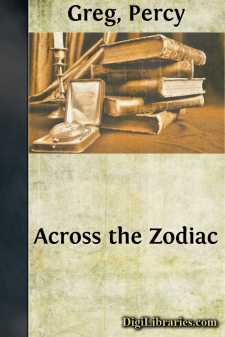 Once only, in the occasional travelling of thirty years, did I lose any important article of luggage; and that loss occurred, not under the haphazard, devil-take-the-hindmost confusion of English, or the elaborate misrule of Continental journeys, but through the absolute perfection and democratic despotism of the American system. I had to give up a visit to the scenery of Cooper's best Indian novelsвЂ”no slight sacrificeвЂ”and hasten at once to New York to repair the loss. This incident brought me, on an evening near the middle of September 1874, on board a river steamboat starting from Albany, the capital of the State, for the Empire City. The banks of the lower Hudson are as well worth seeing as those of the Rhine itself, but even America has not yet devised means of lighting them up at night, and consequently I had no amusement but such as I could find in the conversation of my fellow-travellers. With one of these, whose abstinence from personal questions led me to take him for an Englishman, I spoke of my visit to NiagaraвЂ”the one wonder of the world that answers its warrantyвЂ”and to Montreal. As I spoke of the strong and general Canadian feeling of loyalty to the English Crown and connection, a Yankee bystander observedвЂ”

"Wal, stranger, I reckon we could take 'em if we wanted tu!"

"Yes," I replied, "if you think them worth the price. But if you do, you rate them even more highly than they rate themselves; and English colonists are not much behind the citizens of the model Republic in honest self-esteem."

"Not more, perhaps, than you can afford; only California, and everyAtlantic seaport from Portland to Galveston."

"Reckon yew may be about right, stranger," he said, falling back with tolerable good-humour; and, to do them justice, the bystanders seemed to think the retort no worse than the provocation deserved.

"I am sorry," said my friend, "you should have fallen in with so unpleasant a specimen of the character your countrymen ascribe with too much reason to Americans. I have been long in England, and never met with such discourtesy from any one who recognised me as an American."

After this our conversation became less reserved; and I found that I was conversing with one of the most renowned officers of irregular cavalry in the late Confederate serviceвЂ”a service which, in the efficiency, brilliancy, and daring of that especial arm, has never been surpassed since Maharbal's African Light Horse were recognised by friends and foes as the finest corps in the small splendid army of Hannibal.

Colonel AвЂ”вЂ” (the reader will learn why I give neither his name nor real rank) spoke with some bitterness of the inquisitiveness which rendered it impossible, he said, to trust an American with a secret, and very difficult to keep one without lying. We were presently joined by Major BвЂ”вЂ”, who had been employed during the war in the conduct of many critical communications, and had shown great ingenuity in devising and unravelling ciphers....