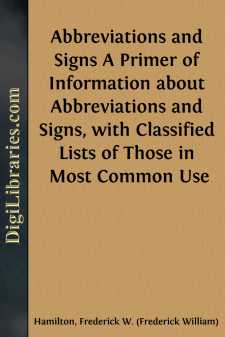 The use of abbreviations is as old as the use of alphabets. In inscriptions and on coins and in other places where room is limited they have always been used in order to save space. The words GUILIELMUS QUARTUS DEI GRATIA REX BRITANNIARUM FIDEI DEFENSOR would hardly go around the circumference of a sixpence, three quarters of an inch in diameter. Therefore, we find them written GUILIELMUS IIII D: G: BRITANNIAR: REX F: D: In the manuscript period abbreviations were very extensively used. This was done partly to lighten the great labor of hand copying and partly to effect a double saving of expense, in labor and in costly material. Certain of these abbreviations were in common use and perfectly intelligible. Unfortunately the copyists did not limit their abbreviations to these, but devised others for their own use much to the discomfort of their readers, especially after the lapse of centuries.

The introduction of printing removed the pressing necessity for the extensive use of abbreviations, but the actual use continued much longer than one would think. The early printed books were reproductions of manuscripts. In some cases the earliest were almost forgeries, and were probably intended to be sold as manuscripts. The types were cut in imitation of the handwriting of some well-known scribe and all his mannerisms and peculiarities were faithfully copied. An incidental result was the expansion of fonts of type by the inclusion of a great number of ligatures and of characters indicating the omission or combination of letters. Habit dies hard, and even after the type founders had freed themselves from the tyranny of manuscript printers continued to follow the habits of the copyist. The saving of material and labor still continued to be considered. The methods of abbreviation in use in written matter continued to be followed in print even down to the first quarter of the last century.

The result of all this abbreviation was serious and well-founded complaint about the difficulty of reading books thus printed. De Vinne gives the following astonishing example, said to be taken practically at random from a Latin copy of the Logic of Ockham printed at Paris in 1488.

The best present usage is to use abbreviations very sparingly. Certain recognized abbreviations are used under certain conditions, but generally only under constraint of limited space.

RULES FOR THE USE OF ABBREVIATIONS

Use no contractions or abbreviations in any place where there is room to print the words in full.

All legitimate words should be spelled out in full in text matter, but abbreviations are often needed in book work for footnotes and tables and in commercial work, where many brief forms and signs are used which are commonly understood and are as intelligible as words....