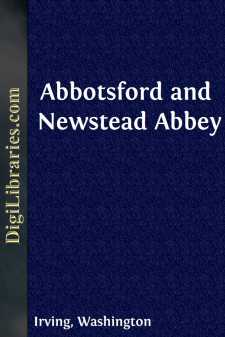 I sit down to perform my promise of giving you an account of a visit made many years since to Abbotsford. I hope, however, that you do not expect much from me, for the travelling notes taken at the time are so scanty and vague, and my memory so extremely fallacious, that I fear I shall disappoint you with the meagreness and crudeness of my details.

Late in the evening of August 29, 1817, I arrived at the ancient little border town of Selkirk, where I put up for the night. I had come down from Edinburgh, partly to visit Melrose Abbey and its vicinity, but chiefly to get sight of the "mighty minstrel of the north." I had a letter of introduction to him from Thomas Campbell, the poet, and had reason to think, from the interest he had taken in some of my earlier scribblings, that a visit from me would not be deemed an intrusion.

On the following morning, after an early breakfast, I set off in a postchaise for the Abbey. On the way thither I stopped at the gate of Abbotsford, and sent the postilion to the house with the letter of introduction and my card, on which I had written that I was on my way to the ruins of Melrose Abbey, and wished to know whether it would be agreeable to Mr. Scott (he had not yet been made a Baronet) to receive a visit from me in the course of the morning.

While the postilion was on his errand, I had time to survey the mansion. It stood some short distance below the road, on the side of a hill sweeping down to the Tweed; and was as yet but a snug gentleman's cottage, with something rural and picturesque in its appearance. The whole front was overrun with evergreens, and immediately above the portal was a great pair of elk horns, branching out from beneath the foliage, and giving the cottage the look of a hunting lodge. The huge baronial pile, to which this modest mansion in a manner gave birth was just emerging into existence; part of the walls, surrounded by scaffolding, already had risen to the height of the cottage, and the courtyard in front was encumbered by masses of hewn stone.

The noise of the chaise had disturbed the quiet of the establishment. Out sallied the warder of the castle, a black greyhound, and, leaping on one of the blocks of stone, began a furious barking. His alarum brought out the whole garrison of dogs:

"Both mongrel, puppy, whelp, and hound,  And curs of low degree;"

all open-mouthed and vociferous.—I should correct my quotation;—not a cur was to be seen on the premises: Scott was too true a sportsman, and had too high a veneration for pure blood, to tolerate a mongrel.

In a little while the "lord of the castle" himself made his appearance. I knew him at once by the descriptions I had read and heard, and the likenesses that had been published of him. He was tall, and of a large and powerful frame. His dress was simple, and almost rustic. An old green shooting-coat, with a dog-whistle at the buttonhole, brown linen pantaloons, stout shoes that tied at the ankles, and a white hat that had evidently seen service. He came limping up the gravel walk, aiding himself by a stout walking-staff, but moving rapidly and with vigor. By his side jogged along a large iron-gray stag-hound of most grave demeanor, who took no part in the clamor of the canine rabble, but seemed to consider himself bound, for the dignity of the house, to give me a courteous reception....