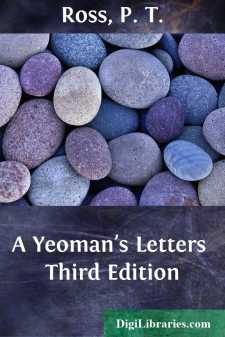 "More khaki," sniffed a bored but charming lady, as she glanced at a picture of the poor Yeomanry at Lindley, and then hastily turned away to something of greater interest. I overheard the foregoing at the Royal Academy, soon after my return from South Africa, last May, and thanked the Fates that I was in mufti. It was to a certain extent indicative of the jaded interest with which the War is now being followed by a large proportion of the public at home, the majority of whom, I presume, have no near or dear ones concerned in the affair; a public which cheered itself hoarse and generally made "a hass" of itself many months ago in welcoming certain warriors whose period of active service had been somewhat short. I wonder how the veterans of the Natal campaign, the gallant Irish Brigade, and others, will be received when they return? "Come back from the War! What War?"

And yet in spite of this apathy, "War Books" keep appearing, and here is a simple Yeoman thrusting yet another on the British Public. Still 'twere worse than folly to apologise, for qui s'excuse, s'accuse.

The present unpretentious volume is composed of letters written to a friend from South Africa, during the past twelve months, with a few necessary omissions and additions; the illustrations which have been introduced, are reproductions in pen and ink of pencil sketches done on the veldt or in hospital. The sole aim throughout has been to represent a true picture of the every-day life of a trooper in the Imperial Yeomanry. In many cases the "grousing" of the ranker may strike the reader as objectionable, and had this record been penned in a comfortable study, arm-chair philosophy might have caused many a passage to be omitted. But the true campaigning atmosphere would have been sacrificed.

As the Sussex Squadron of Imperial Yeomanry was, in popular parlance, "on its own" till the end of May, the letters dealing with that period have been excluded. However, a brief account of the doings of the Squadron up to that time is necessary to give continuity to the story, so here it is:

The Yeomanry is a Volunteer Force, and as is generally known, was embodied in Great Britain during the wars of the French Revolution. History records that at the period named, the County of Sussex possessed one of the finest Corps in England. Autres temps, autres mœurs, and so from apathy and disuse the Sussex Yeomanry gradually dwindled in numbers and importance, until it eventually became extinct. Then came the dark days of November and December, in the year eighteen-hundred-and-ninety-nine. Who will ever forget them? And who does not remember with pride the great outburst of patriotism, which, like a volcanic eruption, swept every obstacle before it, banishing Party rancour and class prejudice, thus welding the British race in one gigantic whole, ready to do and die for the honour of the Old Flag, and in defence of the Empire which has been built up by the blood and brains of its noblest sons. The call for Volunteers for Active Service was answered in a manner which left no doubt as to the issue. From North, South, East, and West, came offers of units, then tens, then hundreds, and finally, thousands, the flower of the Nation, were in arms ready for action. The Hon. T. A. Brassey, a Sussex man, holding a commission in the West Kent Yeomanry, applied for permission and undertook, early in February, 1900, to form a squadron of Yeomanry from Sussex. The enlistment was principally done at Eastbourne, as were also the preliminary drills. We went into quarters at Shorncliffe where we trained until the last week in March, when early, very early, one dark cold morning, a wailing sleepy drum and fife band played us down to the Shorncliffe Station, where we entrained for the Albert Docks, London. There the transport "Delphic" received us, together with a squadron of Paget's Horse (the 73rd I.Y.), and soon after noon the officers and troopers were being borne down the river, and with mixed feelings, were beginning to realise they were actually off at last. Many, alas, were destined never to return.

It is more amusing than ever, now, to recall the remarks of cheerful, chaffing friends, who indulged in sly digs at the poor Yeomen previous to their departure. At that time, as now, "the end was in sight" only we had not got used to it. It was a common experience to be greeted with, "Ha, going out to South Africa! Why it'll be all over before you get there," or "Well, it'll be a pleasant little trip there and back, for I don't suppose they'll land you." Subsequent experience of troopships has dispelled even "the pleasant trip" illusion. Another favourite phrase, was "Well, if they do use you, they'll put you on the lines of communications." Sometimes a generous friend would confidentially ask, "Do you think they'll let you start?" And one, a lady, anxious on account of gew-gaws, observed, "Oh, I hope they'll give you a medal."

Eventually the slow but sure S.S....