A Yankee in the Trenches 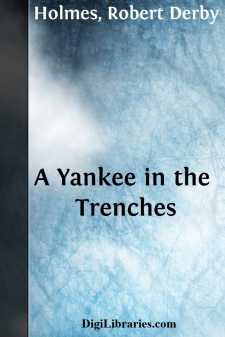 CHAPTER I JOINING THE BRITISH ARMY

Once, on the Somme in the fall of 1916, when I had been over the top and was being carried back somewhat disfigured but still in the ring, a cockney stretcher bearer shot this question at me:

And for the life of me I couldn't answer. After more than a year in the British service I could not, on the spur of the moment, say exactly why I was there.

To be perfectly frank with myself and with the reader I had no very lofty motives when I took the King's shilling. When the great war broke out, I was mildly sympathetic with England, and mighty sorry in an indefinite way for France and Belgium; but my sympathies were not strong enough in any direction to get me into uniform with a chance of being killed. Nor, at first, was I able to work up any compelling hate for Germany. The abstract idea of democracy did not figure in my calculations at all.

However, as the war went on, it became apparent to me, as I suppose it must have to everybody, that the world was going through one of its epochal upheavals; and I figured that with so much history in the making, any unattached young man would be missing it if he did not take a part in the big game.

I had the fondness for adventure usual in young men. I liked to see the wheels go round. And so it happened that, when the war was about a year and a half old, I decided to get in before it was too late.

On second thought I won't say that it was purely love for adventure that took me across. There may have been in the back of my head a sneaking extra fondness for France, perhaps instinctive, for I was born in Paris, although my parents were American and I was brought to Boston as a baby and have lived here since.

Whatever my motives for joining the British army, they didn't have time to crystallize until I had been wounded and sent to Blighty, which is trench slang for England. While recuperating in one of the pleasant places of the English country-side, I had time to acquire a perspective and to discover that I had been fighting for democracy and the future safety of the world. I think that my experience in this respect is like that of most of the young Americans who have volunteered for service under a foreign flag.

I decided to get into the big war game early in 1916. My first thought was to go into the ambulance service, as I knew several men in that work. One of them described the driver's life about as follows. He said:

That settled the ambulance for me. I hadn't wanted particularly to kill a Hun until it was suggested that I mightn't....