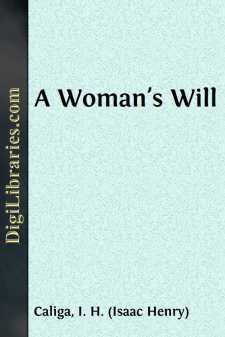 GOOD-BYE—good-bye, Rosina!” cried Jack, giving one last violent wave to his handkerchief. And then he put it back in his pocket, because the crowd upon the deck of the departing Liner had now become a mere blur in the distance, and distant blurs seemed to his practical nature unworthy any further outlay of personal energy. “But oh!” he added, as he and Carter turned to quit the dock, “how the family are just agoing to revel in peace for these next few months! The Milennium!—well, I don’t know!”

“I do not see how you and your Uncle John ever came to let her go off all alone like that,” Carter said, with a gloom that did not try to mask a terrible reproach; “she’ll be so awfully liable to meet some foreigner over there and—and just marry him.” He threw up his cane as he spoke, intending to rap on the boarding by which they were that instant passing.

Jack thrust his own cane out quickly and barred the other with an excellent fencing fente.

“No rapping on wood!” he cried sharply; “not after that speech!—you know!”

“What do you mean?” he asked; “do you mean to say that you’d stand her marrying any one over there for one minute?”

“Stand it!” said Jack, “would we stand it, did you say? My dear fellow, how plainly you betray the fact that you are in love with Rosina. We,—myself and the family,—on the contrary, live with her. The difference in the two propositions is too tremendous to be quickly grasped by you even, but it is just about the same distance as that between theory and practice.”

“Nonsense!” said Carter, with an air of deep annoyance.

“I’ll tell you how I personally regard Rosina,” Jack went on, paying no attention to the other’s exclamation; “I look upon her as very likely to marry abroad, because I don’t know of but one man at home clever enough to be able to marry her.”

He laid his hand upon Carter’s shoulder as he spoke, and Carter, who didn’t at all understand what he meant, thought that he understood, and was correspondingly happy.

They boarded the ferry then, and went from Hoboken straight back to civilization.

The “Kronprinz” meanwhile was slowly wending her way down the river, past the skyscrapers, and out towards the open sea.

Rosina, already established in her chair, with a mother-of-pearl lorgnette upon her lap and a pair of field-glasses swinging from the card-holder, felt more placidly happy than she had in years. If those left behind who supposed that she was going abroad to get a second husband could but have gazed into her heart, they would have comprehended the utter and complete falsity of their views.

Her year and a half of widowhood had been one long-continued period of quiet ecstasy.

Standing alone in her own room the morning after the funeral, she had made a vow to never marry again.

“Enough is as good as a feast,” she had said, surveying her crape-draped self with a deep sense of satisfaction; “it never approached anything like a feast, but it certainly has taught me to know when I have had enough.”

And then new orders had been issued to every department of her establishment, and a peace approaching Paradise reigned in her heart....