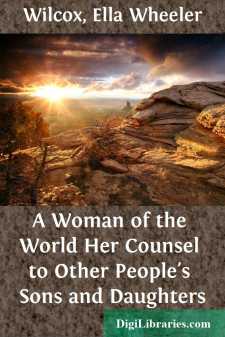 Were you an older man, my dear Ray, your letter would be consigned to the flames unanswered, and our friendship would become constrained and formal, if it did not end utterly. But knowing you to be so many years my junior, and so slightly acquainted with yourself or womankind, I am going to be the friend you need, instead of the misfortune you invite.

I will not say that your letter was a complete surprise to me. It is seldom a woman is so unsophisticated in the ways of men that she is not aware when friendship passes the borderline and trespasses on the domain of passion.

I realized on the last two occasions we met that you were not quite normal. The first was at Mrs. Hanover's dinner; and I attributed some indiscreet words and actions on your part to the very old Burgundy served to a very young man.

Since the memory of mortal, Bacchus has been a confederate of Cupid, and the victims of the former have a period (though brief indeed) of believing themselves slaves to the latter.

As I chanced to be your right-hand neighbour at that very merry board, where wit, wisdom, and beauty combined to condense hours into minutes, I considered it a mere accident that you gave yourself to me with somewhat marked devotion. Had I been any other one of the ladies present, it would have been the same, I thought. Our next and last encounter, however, set me thinking.

It was fully a week later, and that most unromantic portion of the day, between breakfast and luncheon.

It was a Bagby recital, and you sought me out as I was listening to the music, and caused me to leave before the programme was half done. You were no longer under the dominion of Bacchus, though Euterpe may have taken his task upon herself, as she often does, and your manner and expression of countenance troubled me.

I happen to be a woman whose heart life is absolutely complete. I have realized my dreams, and have no least desire to turn them into nightmares. I like original rôles, too, and that of the really happy wife is less hackneyed than the part of the "misunderstood woman." And I find greater enjoyment in the steady flame of one lamp than in the flaring light of many candles.

I have taken a good deal of pride in keeping my lamp well trimmed and brightly burning, and I was startled and offended at the idea of any man coming so near he imagined he might blow out the light.

Your letter, however, makes me more sorry than angry.

You are passing through a phase of experience which comes to almost every youth, between sixteen and twenty-four.

Your affectional and romantic nature is blossoming out, and you are in that transition period where an older woman appeals to you.

Being crude and unformed yourself, the mature and ripened mind and body attract you.

A very young man is fascinated by an older woman's charms, just as a very old man is drawn to a girl in her teens.

This is according to the law of completion, each entity seeking for what it does not possess.

Ask any middle-aged man of your acquaintance to tell you the years of the first woman he imagined he loved, and you will find you are following a beaten path....