A Voyage round the World A book for boys 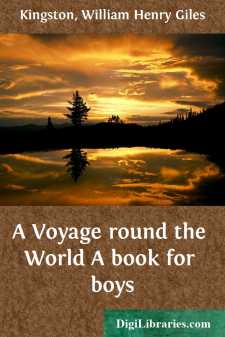 My home, and how I left it.

The day arrived. A post-chaise stood in front of the old grey manor-house. I have it all before me. The pointed gables—the high-pitched, dark weather; stained roof—the numberless latticed windows—the moat, now dry, which had once served to keep out a body of Cromwell’s horse—the tall elms, which had nestled many a generation of rooks—the clump of beech trees, and the venerable wide-spreading oak—the broad gravelled court on one side, and the velvety lawn on the other, sloping away down to the fine, large, deep fish-pond, whose waters, on which I had obtained my first nautical experiences, as seen through the green foliage, were sparkling brighter than ever under the deep blue of the summer sky.

At the hall door were assembled all those I loved on earth—and dearly, too, I loved them. My mother, as good and kind a mother as ever nursed a somewhat numerous and noisy progeny; my sisters, dear, sweet, good girls; and half-a-dozen brothers, honest, generous, capital fellows; our father, too—such a father!—we always agreed that no one could come up to him. Other fellows might have very good fathers, but they were not equal to him! He could be just like one of us at cricket, or out fishing, or shooting, and yet he was always right, and there was not a finer-looking gentleman in the county, and that every one said. We were all at home for the Midsummer holidays—that is to say, we boys; our mother was not a person to let her girls go to school. Who could say that we were not met for the last time in our lives?

I was the third of the boys. Two of our sisters were older than any of us. I loved them, and they all loved me. Not that we ever talked about that; I knew it and felt it, and yet I was going to leave them by my own express wish.

I was not what is called a studious boy. I was fond of reading, and I read all the books of voyages and travels I could lay hands on, and before long began to wish to go and see with my own eyes what I had read about. My brothers were fond of shooting and fishing and rowing, and so was I; but I thought shooting tigers and lions and elephants, and fishing for whales, and sailing over the salt ocean, would be much grander work than killing partridges, catching perch, or rowing about our pond in a punt. I do not know that my imaginings and wishes, ardent as they grew, would ever have produced any definite form of action, had not an old schoolfellow of our father’s, called Captain Frankland, about a year before the day I speak of, come to our house. As soon as I knew he was coming I was very eager to see him, for I heard our father tell our mother that there was scarcely a part of the world he had not visited, and that he was looked upon as a first-rate navigator, and a most scientific seaman. He had been in the navy during the war-time, but peace came before he was made a lieutenant; and believing that he should not there find sufficient employment for his energies, he had quitted it and entered the merchant-service....