A Virtuoso's Collection (From "Mosses from an Old Manse") 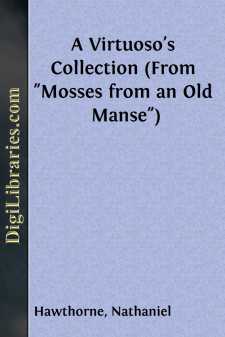 The other day, having a leisure hour at my disposal, I stepped into a new museum, to which my notice was casually drawn by a small and unobtrusive sign: "TO BE SEEN HERE, A VIRTUOSO'S COLLECTION." Such was the simple yet not altogether unpromising announcement that turned my steps aside for a little while from the sunny sidewalk of our principal thoroughfare. Mounting a sombre staircase, I pushed open a door at its summit, and found myself in the presence of a person, who mentioned the moderate sum that would entitle me to admittance.

"Three shillings, Massachusetts tenor," said he. "No, I mean half a dollar, as you reckon in these days."

While searching my pocket for the coin I glanced at the doorkeeper, the marked character and individuality of whose aspect encouraged me to expect something not quite in the ordinary way. He wore an old-fashioned great-coat, much faded, within which his meagre person was so completely enveloped that the rest of his attire was undistinguishable. But his visage was remarkably wind-flushed, sunburnt, and weather-worn, and had a most, unquiet, nervous, and apprehensive expression. It seemed as if this man had some all-important object in view, some point of deepest interest to be decided, some momentous question to ask, might he but hope for a reply. As it was evident, however, that I could have nothing to do with his private affairs, I passed through an open doorway, which admitted me into the extensive hall of the museum.

Directly in front of the portal was the bronze statue of a youth with winged feet. He was represented in the act of flitting away from earth, yet wore such a look of earnest invitation that it impressed me like a summons to enter the hall.

"It is the original statue of Opportunity, by the ancient sculptor Lysippus," said a gentleman who now approached me. "I place it at the entrance of my museum, because it is not at all times that one can gain admittance to such a collection."

The speaker was a middle-aged person, of whom it was not easy to determine whether he had spent his life as a scholar or as a man of action; in truth, all outward and obvious peculiarities had been worn away by an extensive and promiscuous intercourse with the world. There was no mark about him of profession, individual habits, or scarcely of country; although his dark complexion and high features made me conjecture that he was a native of some southern clime of Europe. At all events, he was evidently the virtuoso in person.

"With your permission," said he, "as we have no descriptive catalogue, I will accompany you through the museum and point out whatever may be most worthy of attention. In the first place, here is a choice collection of stuffed animals."

Nearest the door stood the outward semblance of a wolf, exquisitely prepared, it is true, and showing a very wolfish fierceness in the large glass eyes which were inserted into its wild and crafty head. Still it was merely the skin of a wolf, with nothing to distinguish it from other individuals of that unlovely breed.

"How does this animal deserve a place in your collection?" inquired I.

"It is the wolf that devoured Little Red Riding Hood," answered the virtuoso; "and by his side—with a milder and more matronly look, as you perceive—stands the she-wolf that suckled Romulus and Remus."

"Ah, indeed!" exclaimed I. "And what lovely lamb is this with the snow-white fleece, which seems to be of as delicate a texture as innocence itself?"

"Methinks you have but carelessly read Spenser," replied my guide, "or you would at once recognize the 'milk-white lamb' which Una led....