A Vindication of the Press 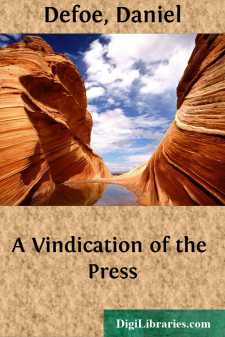 A Vindication of the Press is one of Defoe's most characteristic pamphlets and for this reason as well as for its rarity deserves reprinting. Besides the New York Public Library copy, here reproduced, I know of but one copy, which is in the Indiana University Library. Neither the Bodleian nor the British Museum has a copy.

Like many items in the Defoe canon, this tract must be assigned to him on the basis of internal evidence; but this evidence, though circumstantial, is convincing. W.P. Trent included A Vindication in his bibliography of Defoe in the CHEL, and later bibliographers of Defoe have followed him in accepting it. Since the copy here reproduced was the one examined by Professor Trent, the following passage from his ms. notes is of interest:

The tract was advertised, for "this day," in the St. James Evening Post, April 19-22, 1718. It is not included in the chief lists of Defoe's writings, but it has been sold as his, and the only copy I have seen, one kindly loaned me by Dr. J.E. Spingarn, once belonged to some eighteenth century owner, who wrote Defoe's name upon it. I was led by the advertisement mentioned above to seek the pamphlet, thinking it might be Defoe's; but I failed to secure a sight of it until Professor Spingarn asked me whether in my opinion the ascription to Defoe was warranted, and produced his copy.

Perhaps the most striking evidence for Defoe's authorship of A Vindication is the extraordinary reference to his own natural parts and to the popularity of The True-Born Englishman some seventeen years after that topical poem had appeared [pp. 29f.]. Defoe was justly proud of this verse satire, one of his most successful works, and referred to it many times in later writings; it is hard to believe, however, that anyone but Defoe would have praised it in such fulsome terms in 1718.

The general homeliness and facility of the style, together with characteristic phrases which occur in his other writings, indicate Defoe's hand. Likewise homely similitudes and comparisons, specific parallels with his known work, and characteristic treatment of matter familiar in his other works, all furnish evidence of his authorship of this pamphlet.

Just what motive caused Defoe to write A Vindication of the Press is not clear. Unlike his earlier An Essay on the Regulation of the Press (1704), A Vindication does not seem to have been occasioned by a specific situation, and in it Defoe is not alone concerned with freedom of the press, but writes on a more general and discursive level. His opening paragraph states that "The very great Clamour against some late Performances of Authorship, and the unprecedented Criticisms introduc'd" make such an essay as he writes "absolutely necessary." Yet there is no clear indication of just what works occasion this necessity. The ironic reference to Mr. Dennis at the end of the first paragraph, taken together with the praise of Mr. Pope's translation of Homer and the allusion to "the malicious and violent Criticisms of a certain Gentleman in its Disfavour" [p....