A True Hero A Story of the Days of William Penn 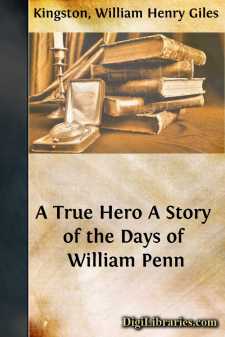 The Protectorate had come to an end ten years before the period when our story commences; and Charles the Second, restored to the throne of England, had since been employed in outraging all the right feelings of the people over whom he was called to reign, and in lowering the English name, which had been so gloriously raised by the wisdom of Cromwell. The body of that sagacious ruler of a mighty nation had been dragged out of its tomb among the kings in Westminster, and hanged on the gallows-tree at Tyburn; the senseless deed instigated by the petty revenge of his contemptible successor. The mouldering remains of Blake, also, one of the noblest among England’s naval heroes, had been taken from its honoured resting-place, and cast into an unknown grave in Saint Margaret’s churchyard. Episcopacy had been restored by those who hoped thus to pave the way for the re-introduction of Romanism, with its grinding tyranny and abject superstitions. The “Conventicle Act,” prohibiting more than five persons, exclusive of the family, to meet together for religious worship according to any other than the national ritual, had been passed, and was rigidly enforced; the dominant party thus endeavouring to deprive the people of one of the most sacred rights of man,—that of worshipping God according to the dictates of conscience. England’s debauched king, secretly a Papist, had sold his country for gold to England’s hereditary foe, whose army he had engaged to come and crush the last remnants of national freedom, should his Protestant people dare to resist the monarch’s traitorous proceedings. The profligacy and irreligion of the court was widely imitated by all classes, till patriots, watching with gloomy forebodings the downward progress of their country, began to despair of her future fate. Such was the state of things when, on the morning of the 14th of August, 1670, several sedate, grave-looking persons were collected at the north end of Gracechurch Street, in the City of London. Others were coming up from all quarters towards the spot. As the first arrived, they stood gazing towards the door of a building, before which were drawn up a body of bearded, rough soldiers, with buff coats, halberds in hand, and iron caps on their heads. Several of the persons collected, in spite of the armed men at the door, advanced as if about to enter the building.

“You cannot go in there,” said the sergeant of the party; “we hold it in the name of the king. Begone about your business, or beware of the consequences!” In vain the grave citizens mildly expostulated. They received similar rough answers. By this time other persons had arrived, while many passers-by stopped to see what was going forward. Among those who came up was a tall young man, whose flowing locks and feathered cap, with richly-laced coat, and silk sash over his shoulder, to which, however, the usual appendage, a sword, was wanting, showed that he was a person of quality and fashion. Yet his countenance wore a grave aspect, which assumed a stern expression as he gazed at the soldiers. He stopped, and spoke to several of those standing round, inquiring apparently what had occurred. About the same time, another man, who seemed to be acquainted with many of the persons in the crowd, was making his way among them. He was considerably more advanced in life than the first-mentioned person, and in figure somewhat shorter and more strongly built. Though dressed as a civilian, he had a military look and air. From an opposite direction two other persons approached the spot, intending, it seemed, to pass by. The one was a man whose grizzly beard and furrowed features showed that he had seen rough service in his time, his dress and general appearance bespeaking the soldier. His companion was a youth of sixteen or seventeen years of age, so like him in countenance that their relationship was evident. From the inquiries they made, they were apparently strangers.

“Canst tell me, friend, what has brought all these people together?” said the elder man to a by-stander.

“Most of these people are ‘Friends,’ as they call themselves,” answered the man addressed, a well-to-do artisan, “or ‘Quakers,’ as the world calls them, because they bid sinners exceedingly to quake and tremble at the word of the Lord. To my mind they are harmless as to their deeds, though in word they are truly powerful at times. The bishops and church people do not like them because they declare that God can be worshipped in the open air, or in a man’s own home, as well as in the grandest cathedral, or ‘steeple house,’ as they call the church. The Independents are opposed to them, because they deem ministers unnecessary, and trust to the sword of the Spirit rather than to carnal weapons; while the wealthy and noble disdain them, because they refuse to uncover their heads, or to pay undue respect to their fellow-men, however rich or exalted in rank they may be. They have come to hold a meeting in yonder house, where the soldiers are stationed; but as speaking will not open the doors, they will have to go away again disappointed.”

“If they are the harmless people you describe, that seems a hard case,” observed the stranger. “By what right are they prohibited from thus meeting?”