A Trip to Manitoba 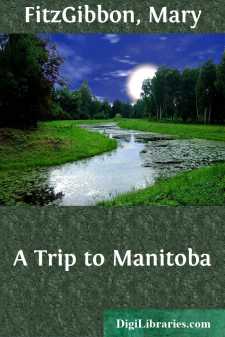 After a long day's journey on the Grand Trunk Railway, without even the eccentricities of fellow-passengers in our Pullman car to amuse us, we were all glad to reach Sarnia. The monotony of the scenery through which we passed had been unbroken, except by a prettily situated cemetery, and the tasteful architecture of a hillside church, surrounded by trees just putting on their spring foliage.

It was eight o'clock when we got to the wharf, and the steamer Manitoba only waited for our arrival to cast loose her moorings and enter the dark blue waters of Lake Huron. "Haste" will not express the excitement of the scene. Men, rushing hither and thither in search of friends, traps, and luggage, were goaded to fury by the calmness of the officials and their determination not to be hurried. Hearing there was no chance of having tea on board that night, and discovering near the wharf a signboard announcing that meals could be obtained at all hours (except, as we were told, that particular one), we with difficulty persuaded the proprietress to let us have something to eat. Amidst muttered grumblings that she was "slaved to death," that "her life was not worth a rap," and so on, every remark being emphasized with a plate or dish, we were at last supplied with bread, cheese, and beef-steak, for which we were kindly allowed to pay fifty cents (2s. 6d.) each.

The scene on board the boat beggars description. The other steamers being still ice-bound on Lake Superior, the Manitoba was obliged to take as much freight and as many passengers as she could carry, many of the latter having been waiting in Sarnia upwards of ten days for her departure. Surveying parties, immigrants of almost every nation on their way to make homes in the great North West, crowded the decks and gangways. The confusion of tongues, the shrill cries of the frightened and tired children, the oaths of excited men, and the trundling and thumping of the baggage, mingled with the shrieks of adjacent engines "made night hideous." Porters and cabmen jostled women laden with baskets of linen, brought on board at the last minute, when the poor tired stewardess had no time to administer the well-merited reprimand; passengers rushed about in search of the purser, anxious to secure their state-rooms before they were usurped by some one else.

It was midnight when the commotion had subsided, and quarters were assigned to all but a stray man or two wandering about in search of some Mr. Brown or Mr. Jones, whose room he was to share. Climbing into my berth, I soon fell asleep; but only for a few moments. The shrill whistle, the vehement ringing of the captain's bell, the heavy beat of the paddles, roused me; and as we left the wharf and steamed out from among the ships and small craft dotting the water on every side, "Off at last!" was shouted from the crowded decks....