A Treatise on Good Works 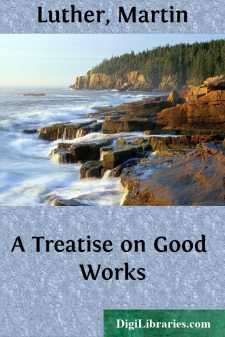 1. The Occasion of the Work.—Luther did not impose himself as reformer upon the Church. In the course of a conscientious performance of the duties of his office, to which he had been regularly and divinely called, and without any urging on his part, he attained to this position by inward necessity. In 1515 he received his appointment as the standing substitute for the sickly city pastor, Simon Heinse, from the city council of Wittenberg. Before this time he was obliged to preach only occasionally in the convent, apart from his activity as teacher in the University and convent. Through this appointment he was in duty bound, by divine and human right, to lead and direct the congregation at Wittenberg on the true way to life, and it would have been a denial of the knowledge of salvation which God had led him to acquire, by way of ardent inner struggles, if he had led the congregation on any other way than the one God had revealed to him in His Word. He could not deny before the congregation which had been intrusted to his care, what up to this time he had taught with ever increasing clearness in his lectures at the University—for in the lectures on the Psalms, which he began to deliver in 1513, he declares his conviction that faith alone justifies, as can be seen from the complete manuscript, published since 1885, and with still greater clearness from his Commentary on the Epistle to the Romans (1515-1516), which is accessible since 1908; nor what he had urged as spiritual adviser of his convent brethren when in deep distress—compare the charming letter to Georg Spenlein, dated April 8, 1516.

Luther's first literary works to appear in print were also occasioned by the work of his calling and of his office in the Wittenberg congregation. He had no other object in view than to edify his congregation and to lead it to Christ when, in 1517, he published his first independent work, the Explanation of the Seven Penitential Psalms. On Oct 31 of the same year he published his 95 Theses against Indulgences. These were indeed intended as controversial theses for theologians, but at the same time it is well known that Luther was moved by his duty toward his congregation to declare his position in this matter and to put in issue the whole question as to the right and wrong of indulgences by means of his theses. His sermon Of Indulgences and Grace, occasioned by Tetzel's attack and delivered in the latter part of March, 1518, as well as his sermon Of Penitence, delivered about the same time, were also intended for his congregation. Before his congregation (Sept., 1516-Feb., 1517) he delivered the Sermons on the Ten Commandments, which were published in 1518 and the Sermons on the Lord's Prayer, which were also published in 1518 by Agricola. Though Luther in the same year published a series of controversial writings, which were occasioned by attacks from outside sources, viz., the Resolutiones disputationis de Virtute indulgentiarum, the Asterisci adversus obeliscos Joh....