A Traveller in War-Time 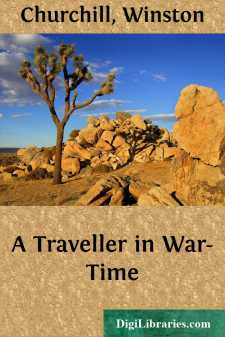 Add to My Favorites
Published: 9 years ago
Downloads: 135
Rating: (0 Votes)

Toward the end of the summer of 1917 it was very hot in New York, and hotter still aboard the transatlantic liner thrust between the piers. One glance at our cabins, at the crowded decks and dining-room, at the little writing-room above, where the ink had congealed in the ink-wells, sufficed to bring home to us that the days of luxurious sea travel, of a la carte restaurants, and Louis Seize bedrooms were gone—at least for a period. The prospect of a voyage of nearly two weeks was not enticing. The ship, to be sure, was far from being the best of those still running on a line which had gained a magic reputation of immunity from submarines; three years ago she carried only second and third class passengers! But most of us were in a hurry to get to the countries where war had already become a grim and terrible reality. In one way or another we had all enlisted.

By "we" I mean the American passengers. The first welcome discovery among the crowd wandering aimlessly and somewhat disconsolately about the decks was the cheerful face of a friend whom at first I did not recognize because of his amazing disguise in uniform. Hitherto he had been associated in my mind with dinner parties and clubs.

That life was past. He had laid up his yacht and joined the Red Cross and, henceforth, for an indeterminable period, he was to abide amidst the discomforts and dangers of the Western Front, with five days' leave every three months. The members of a group similarly attired whom I found gathered by the after-rail were likewise cheerful. Two well-known specialists from the Massachusetts General Hospital made significant the hegira now taking place that threatens to leave our country, like Britain, almost doctorless. When I reached France it seemed to me that I met all the celebrated medical men I ever heard of. A third in the group was a business man from the Middle West who had wound up his affairs and left a startled family in charge of a trust company. Though his physical activities had hitherto consisted of an occasional mild game of golf, he wore his khaki like an old campaigner; and he seemed undaunted by the prospect—still somewhat remotely ahead of him—of a winter journey across the Albanian Mountains from the Aegean to the Adriatic.

After a restless night, we sailed away in the hot dawn of a Wednesday. The shores of America faded behind us, and as the days went by, we had the odd sense of threading uncharted seas; we found it more and more difficult to believe that this empty, lonesome ocean was the Atlantic in the twentieth century. Once we saw a four-master; once a shy, silent steamer avoided us, westward bound; and once in mid-ocean, tossed on a sea sun-silvered under a rack of clouds, we overtook a gallant little schooner out of New Bedford or Gloucester—a forthfarer, too.

Meanwhile, amongst the Americans, the socializing process had begun. Many elements which in a former stratified existence would never have been brought into contact were fusing by the pressure of a purpose, of a great adventure common to us all....