A Tiger's Skin The Lady of the Barge and Others, Part 8. 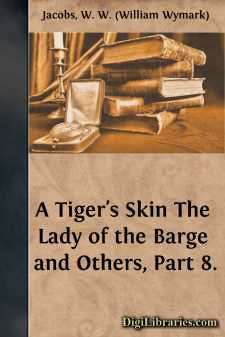 The travelling sign-painter who was repainting the sign of the "Cauliflower" was enjoying a well-earned respite from his labours. On the old table under the shade of the elms mammoth sandwiches and a large slice of cheese waited in an untied handkerchief until such time as his thirst should be satisfied. At the other side of the table the oldest man in Claybury, drawing gently at a long clay pipe, turned a dim and regretful eye up at the old signboard.

"I've drunk my beer under it for pretty near seventy years," he said, with a sigh. "It's a pity it couldn't ha' lasted my time."

The painter, slowly pushing a wedge of sandwich into his mouth, regarded him indulgently.

"It's all through two young gentlemen as was passing through 'ere a month or two ago," continued the old man; "they told Smith, the landlord, they'd been looking all over the place for the 'Cauliflower,' and when Smith showed 'em the sign they said they thought it was the 'George the Fourth,' and a very good likeness, too."

The painter laughed and took another look at the old sign; then, with the nervousness of the true artist, he took a look at his own. One or two shadows—

He flung his legs over the bench and took up his brushes. In ten minutes the most fervent loyalist would have looked in vain for any resemblance, and with a sigh at the pitfalls which beset the artist he returned to his interrupted meal and hailed the house for more beer.

"There's nobody could mistake your sign for anything but a cauliflower," said the old man; "it looks good enough to eat."

The painter smiled and pushed his mug across the table. He was a tender- hearted man, and once—when painting the sign of the "Sir Wilfrid Lawson"—knew himself what it was to lack beer. He began to discourse on art, and spoke somewhat disparagingly of the cauliflower as a subject. With a shake of his head he spoke of the possibilities of a spotted cow or a blue lion.

"Talking of lions," said the ancient, musingly, "I s'pose as you never 'eard tell of the Claybury tiger? It was afore your time in these parts, I expect."

The painter admitted his ignorance, and, finding that the allusion had no reference to an inn, pulled out his pipe and prepared to listen.

"It's a while ago now," said the old man, slowly, "and the circus the tiger belonged to was going through Claybury to get to Wickham, when, just as they was passing Gill's farm, a steam-ingine they 'ad to draw some o' the vans broke down, and they 'ad to stop while the blacksmith mended it. That being so, they put up a big tent and 'ad the circus 'ere.

"I was one o' them as went, and I must say it was worth the money, though Henry Walker was disappointed at the man who put 'is 'ead in the lion's mouth. He said that the man frightened the lion first, before 'e did it.

"It was a great night for Claybury, and for about a week nothing else was talked of. All the children was playing at being lions and tigers and such-like, and young Roberts pretty near broke 'is back trying to see if he could ride horseback standing up....