A Summary History of the Palazzo Dandolo 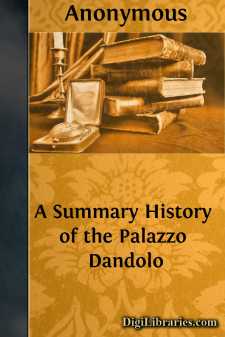 In 1805 the second floor of the Palazzo Dandolo, situated in the Calle delle Razze, and fronting on to the Riva degli Schiavoni, was bought by a certain Dal Niel, sur-named Danieli, from a member of the families of Michiel and Bernardo, into whose hands it had come, partly by inheritance and partly by marriages. The new proprietor converted it into an hotel, giving it his own name—Hotel Danieli.

Although the use to which this Palace, which once occupied so large a place in the glories of the history of Venice, has been put during the present century is very different from that for which it was built, it has always been kept most worthily, first by Danieli, then by his daughter Alfonsina, the wife of Vespasiano Muzzarelli, then by his grand-daughter, Giuseppina Roux, and last by S.S. Genovesi and Campi; so that it had the honour, which it still possesses, of being chosen by Emperors, Kings, Princes, and Ambassadors, and by great men of all countries whose artistic travels bring them to this incomparable city, so justly called the « Pearl of the Adriatic ».

To the honour of the proprietors, who have succeeded one another in this hotel, be it said that although, from time to time, certain works have been executed in this historic Palace, to adapt it to its new use as an hotel, yet not only have the staircases, the saloons and the various apartments been preserved just as they were, but the artistic beauties, and the historical souvenirs, have been carefully respected; the stuccoes and frescoes of the XVIth and XVIIth century have been spared; and the portraits and heraldic shields of the Dandolos, the Bernardos, and the Mocenigos can still be admired today in their original positions.

It will surely be agreeable to the travellers who come to lodge in this remarkable building to know its origin and its history. We propose to give them a rapid sketch of both; and we believe it will not be uninteresting to them to know that in the halls and chambers they inhabit, some of the most important acts of the great Venetian Republic have been discussed and decided upon; and that in this Palace besides Doges and Senators, Kings and Ambassadors, Alfred de Musset (then a fair and charming young man in delicate health) took up his abode, in 1833, and Balzac, m.me George Sand (who here wrote her novel Leone Leoni), and Victor Feuillet, who, for his magnificent romance « L'Honnêteté », drew his inspiration from Venetian subjects.

But to return to the ancient history of the Palace (now Hotel Royal Danieli) it was built in 1400, by one of the Dandolo families, but whether by that of the great Doge, Enrico Dandolo, is not quite certain. In the Chronicles of Malipiero which date from 1457 to 1500 we find the following passage « Today, the 28h August 1498, have arrived the Ambassadors of Florence, Rucellai and Vespucci; who are lodged in the Palazzo Dandolo, in the Calle delle Razze »....