A Stake in the Land

by Peter A. (Peter Alexander) Speek 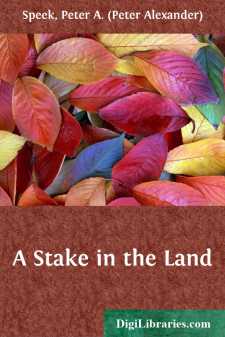 Students of economics know that the roundabout methods of capitalistic production are far more fruitful than the direct methods of the primitive economy. As we advance, we introduce new intermediaries between the beginning and the end of production. This thought occurs to one in the study of Americanization. If we would Americanize the immigrant we must seek him out in his daily economic life and see to it that the influences under which he works are calculated to give him the right feeling toward his new home. A large part of our waking life is spent in gaining a livelihood, and our work brings with it most of our associations. School and church have their place for young and old, and they likewise must be considered. Their effect is direct and immediate and is more likely to attract attention than are the elements making up the economic life.

Doctor Speek has done well in taking up the immigrant as a settler in the newer and developing parts of our country. The settlers are very largely immigrants who are trying to acquire a home and livelihood on the land. The writer of this Introduction has been studying this same subject for many years, and has done so in many different parts of the United States. The conclusion which we might reach deductively is confirmed by observation—namely, that the man who settles on the land in the right way is, with the rarest exceptions, likely to become a good American, as are also his children.

But what do we mean by the right way? We mean that he must be on a farm of suitable size, of good productivity, with needed help in learning how to farm in the new country and with sufficient time in which to pay for his farm. These are not the only considerations, but they are the main ones, and to these Doctor Speek has given his attention.

We are dealing here with the results which are universal. The selection of land is extremely difficult, even for unusually intelligent farmers who have had long experience in our country. To select land wisely is quite beyond the capacity of the ordinary settler. The present writer could give unlimited illustrations of this truth. The man who has lived in the corn belt of Illinois is very apt to think that black soil is necessarily good soil, and, going to another state, may perhaps select some black peat land, underlain with sand, which is almost worthless. He is sure to be prejudiced against red soil, which may, after all, be good land. Once, when the writer was being shown citrous-fruit land in California, the wise friend who was his host would point to one orchard, which was "planted for oranges," and another "ranch" which "was planted to sell to suckers"; yet the ordinary man, even if he spent many years in the study of land values, could not tell the difference....