A Stable for Nightmares or Weird Tales 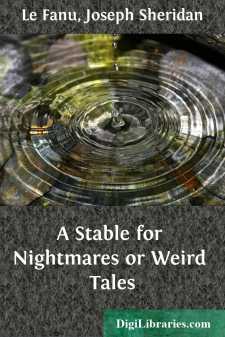 ABOUT thirty years ago I was selected by two rich old maids to visit a property in that part of Lancashire which lies near the famous forest of Pendle, with which Mr. Ainsworth’s “Lancashire Witches” has made us so pleasantly familiar. My business was to make partition of a small property, including a house and demesne to which they had, a long time before, succeeded as coheiresses.

The last forty miles of my journey I was obliged to post, chiefly by cross-roads, little known, and less frequented, and presenting scenery often extremely interesting and pretty. The picturesqueness of the landscape was enhanced by the season, the beginning of September, at which I was travelling.

I had never been in this part of the world before; I am told it is now a great deal less wild, and, consequently, less beautiful.

At the inn where I had stopped for a relay of horses and some dinner—for it was then past five o’clock—I found the host, a hale old fellow of five-and-sixty, as he told me, a man of easy and garrulous benevolence, willing to accommodate his guests with any amount of talk, which the slightest tap sufficed to set flowing, on any subject you pleased.

I was curious to learn something about Barwyke, which was the name of the demesne and house I was going to. As there was no inn within some miles of it, I had written to the steward to put me up there, the best way he could, for a night.

The host of the “Three Nuns,” which was the sign under which he entertained wayfarers, had not a great deal to tell. It was twenty years, or more, since old Squire Bowes died, and no one had lived in the Hall ever since, except the gardener and his wife.

“Tom Wyndsour will be as old a man as myself; but he’s a bit taller, and not so much in flesh, quite,” said the fat innkeeper.

“But there were stories about the house,” I repeated, “that, they said, prevented tenants from coming into it?”

“Old wives’ tales; many years ago, that will be, sir; I forget ’em; I forget ’em all. Oh yes, there always will be, when a house is left so; foolish folk will always be talkin’; but I han’t heard a word about it this twenty year.”

It was vain trying to pump him; the old landlord of the “Three Nuns,” for some reason, did not choose to tell tales of Barwyke Hall, if he really did, as I suspected, remember them.

I paid my reckoning, and resumed my journey, well pleased with the good cheer of that old-world inn, but a little disappointed.

We had been driving for more than an hour, when we began to cross a wild common; and I knew that, this passed, a quarter of an hour would bring me to the door of Barwyke Hall.

The peat and furze were pretty soon left behind; we were again in the wooded scenery that I enjoyed so much, so entirely natural and pretty, and so little disturbed by traffic of any kind. I was looking from the chaise-window, and soon detected the object of which, for some time, my eye had been in search. Barwyke Hall was a large, quaint house, of that cage-work fashion known as “black-and-white,” in which the bars and angles of an oak framework contrast, black as ebony, with the white plaster that overspreads the masonry built into its interstices. This steep-roofed Elizabethan house stood in the midst of park-like grounds of no great extent, but rendered imposing by the noble stature of the old trees that now cast their lengthening shadows eastward over the sward, from the declining sun.

The park-wall was gray with age, and in many places laden with ivy. In deep gray shadow, that contrasted with the dim fires of evening reflected on the foliage above it, in a gentle hollow, stretched a lake that looked cold and black, and seemed, as it were, to skulk from observation with a guilty knowledge.

I had forgot that there was a lake at Barwyke; but the moment this caught my eye, like the cold polish of a snake in the shadow, my instinct seemed to recognize something dangerous, and I knew that the lake was connected, I could not remember how, with the story I had heard of this place in my boyhood.

I drove up a grass-grown avenue, under the boughs of these noble trees, whose foliage, dyed in autumnal red and yellow, returned the beams of the western sun gorgeously....