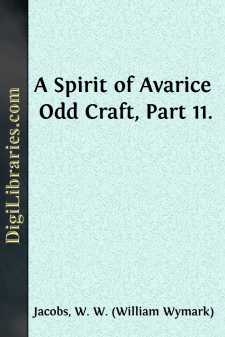 A SPIRIT OF AVARICE

Mr. John Blows stood listening to the foreman with an air of lofty disdain. He was a free-born Englishman, and yet he had been summarily paid off at eleven o'clock in the morning and told that his valuable services would no longer be required. More than that, the foreman had passed certain strictures upon his features which, however true they might be, were quite irrelevant to the fact that Mr. Blows had been discovered slumbering in a shed when he should have been laying bricks.

"Take your ugly face off these 'ere works," said the foreman; "take it 'ome and bury it in the back-yard. Anybody'll be glad to lend you a spade."

Mr. Blows, in a somewhat fluent reply, reflected severely on the foreman's immediate ancestors, and the strange lack of good-feeling and public spirit they had exhibited by allowing him to grow up.

"Take it 'ome and bury it," said the foreman again. "Not under any plants you've got a liking for."

"I suppose," said Mr. Blows, still referring to his foe's parents, and now endeavouring to make excuses for them—"I s'pose they was so pleased, and so surprised when they found that you was a 'uman being, that they didn't mind anything else."

He walked off with his head in the air, and the other men, who had partially suspended work to listen, resumed their labours. A modest pint at the Rising Sun revived his drooping spirits, and he walked home thinking of several things which he might have said to the foreman if he had only thought of them in time.

He paused at the open door of his house and, looking in, sniffed at the smell of mottled soap and dirty water which pervaded it. The stairs were wet, and a pail stood in the narrow passage. From the kitchen came the sounds of crying children and a scolding mother. Master Joseph Henry Blows, aged three, was "holding his breath," and the family were all aghast at the length of his performance. He re-covered it as his father entered the room, and drowned, without distressing himself, the impotent efforts of the others. Mrs. Blows turned upon her husband a look of hot inquiry.

Mrs. Blows turned away, and dropping into a chair threw her apron over her head and burst into discordant weeping. Two little Blows, who had ceased their outcries, resumed them again from sheer sympathy.

"I wish I'd never seen you," sobbed his wife from behind her apron. "Of all the lazy, idle, drunken, good-for-nothing——"

"You're more trouble than you're worth," declared Mrs. Blows. "Look at your father, my dears," she continued, taking the apron away from her face; "take a good look at him, and mind you don't grow up like it."