A Spinner in the Sun 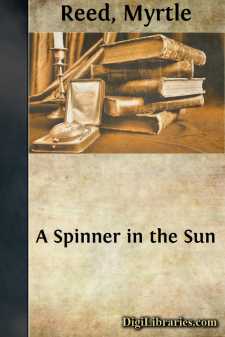 "The Fire was Kind"

The little house was waiting, as it had waited for many years. Grey and weather-worn, it leaned toward the sheltering hillside as though to gather from the kindly earth some support and comfort for old age. Five-and-twenty Winters had broken its spirit, five-and-twenty Springs had not brought back the heart of it, that had once gone out, with dancing feet and singing, and had returned no more.

For a quarter of a century, the garden had lain desolate. Summers came and went, but only a few straggling blooms made their way above the mass of weeds. In early Autumn, thistles and milkweed took possession of the place, the mournful purple of their flowering hiding the garden beneath trappings of woe. And at night, when the Autumn moon shone dimly, frail ghosts of dead flowers were set free from the thistles and milkweed. The wind of Indian Summer, itself a ghost, convoyed them about the garden, but they never went beyond it. Each year the panoply of purple spread farther, more surely hiding the brave blooms beneath.

Far down the path, beside the broken gate, a majestic cypress cast portentous gloom. Across from it, and quite hiding the ruin of the gate, was a rose-bush, which, every June, put forth one perfect white rose. Love had come through the gate and Love had gone out again, but this one flower was left behind.

Brambles grew about the doorstep, and the hinges of the door were deep in rust. No friendly light gleamed at night from the lattice, a beacon to the wayfarer or a message of cheer to the disheartened, since the little house was alone. The secret spinners had hung a drapery of cobwebs before the desolate windows, as though to veil the loneliness from passers-by. No fire warmed the solitary hearth, no gay and careless laughter betrayed the sleeping echoes into answer. Within the house were only dreams, which never had come true.

A bit of sewing yet lay upon the marble-topped table in the sitting-room, and an embroidery frame, holding still a square of fine linen, had fallen from a chair. An open book was propped against the back of the chair, and a low rocker, facing it, was swerved sharply aside. The evidence of daily occupation, suddenly interrupted, was all there—a quiet content, overlaid by a dumb, creeping paralysis.

The March wind blew fiercely through the night and the little house leaned yet more toward the sheltering hill. Afar, in the village, a train rumbled into the station; the midnight train from the city by which the people of Rushton regulated their watches and clocks. Strangely enough, it stopped, and more than one good man, turning uneasily upon his pillow, wondered if the world might have come to its end.

Half an hour afterward, a lone figure ascended the steep road which led to the house. A woman, fearless of the night, because Life had already done its worst to her, stumbled up the stony, overgrown way. The moon shone fitfully among the flying clouds, and she guided herself by its uncertain gleams, pausing now and then, in complete darkness, to wait for more light....