A Soldier's Sketches Under Fire 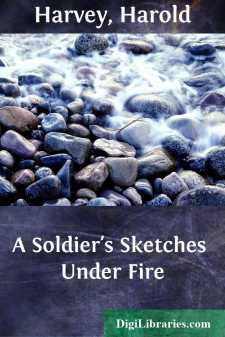 CHAPTER I. From Southampton to Malta.

On the outbreak of the war I joined the Royal Fusiliers, uninfluenced by the appeal of wall-posters or the blandishments of a recruiting sergeant. My former experience as a trooper in the Hertfordshire Yeomanry being accounted unto me for military righteousness, I sailed with my regiment from Southampton on September 3rd, 1914. We thought we were bound for France direct, and only discovered on the passage that we were to be landed, first, at Malta.

I think I know the reason why the short trip across Channel was avoided, but, as it behoves me to be very careful about what I say on certain points, I don't state it.

I show the fore part of the boat, the bows being visible in the distance. The doorways on the right are those of the horse boxes, specially erected on the deck. In fact, the whole liner, with the most creditable completeness and celerity, had been specially fitted up for the use of the troops, still retaining its crew of Lascars, who did the swabbing down and rough work required.

My sketch shows a crane bringing up bales of fodder for the horses from the hold, with two officers standing by to give orders.

We experienced some exciting incidents on the way out; for instance, in the Bay we ran into a fog, and the order was given for all to stand by. For the next two or three hours all were in doubt as to what might happen—of course there was fear of torpedoes.

We heard in the distance several shots fired, presumably by the battle-cruiser which was our escort. When the fog lifted, we could just see the smoke lifting on the horizon of some enemy craft, which had been chased off by our own warship. We again steamed ahead towards our destination and were soon sailing into smooth and calm waters, the temperature becoming quite genial and warm as we approached the Straits of Gibraltar. As we passed through the Straits the message was signalled that those two notorious vessels, the "Goeben" and the "Breslau," were roaming loose in the Mediterranean.

On arrival at Malta, I and others were put through our firing course, and the regiment took over the charge of prisoners and interned Germans, of whom, together, there were on the island—so soon after the beginning of hostilities—no fewer than 8,000. One of the first sketches I made was of our Bivouac.

Malta and the Pirates.

Malta, which has been called "the master key of the Mediterranean and the Levant," "the stepping-stone to Egypt and the Dardanelles," and "the connecting link between England and India," is one of our Empire's most valuable possessions, and its physical formation has made it for generations past of great maritime value. The island is, in itself, a rock, and all its earth and mould has been imported. In the days when there were no submarines or warships, it was the headquarters of pirates roaming at large in the Mediterranean. These pirate crews, after capturing their prey, used to bring their captures into one of the entrances of the island, now called the Grand Harbour....