A Soldier in the Philippines 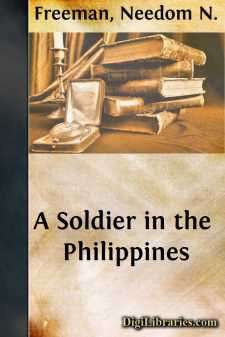 Needom Freeman, in the United States regular army during the years 1898–1900, was born in the quiet little country village of Barrettsville, Dawson County, Ga., on the 25th of September, 1874.

Many things have been said and written of army life during the Spanish-American war, but usually from the officers' point of view. As a matter of fact the ideas of a private if spoken or written are unbelieved simply because the prestige of office was not attached, and receives but little credit.

The early part of my life was passed in and near the little village of my birth. Working on the farm and attending the village school a few months during the time when farming operations were suspended, consumed about all my time. My father being a poor man with a large family and unable to give his children the benefit of any advanced education, it fell to my lot to receive but little instruction. I was the eighth child in a family of thirteen—five sons and eight daughters.

Having attained the long awaited age of twenty-one, when most young men are buoyant and full of hope and ambition, I turned my thoughts westward, where I hoped to make my fortune. I gathered together my few possessions and proceeded to Texas, arriving at Alvarado, Texas, the second day of November, 1895.

Obtaining employment on a farm, my old occupation was resumed for eighteen weeks, but finding this too commonplace and not fulfilling my desires nor expectations, the farm work was once more given up.

I obtained a position with a wrecking crew on the Santa Fe Railroad. For twelve months I worked with this crew, then gave it up in disgust.

A few weeks' employment in the cotton mills of Dallas, Texas, were sufficient to satisfy me with that sort of work.

I next obtained employment with the street railroad of Dallas, filling the position of motorman, which I held for three months. One night, while with several friends, the subject of enlisting in the army was discussed; this strongly appealed to me, and studying the matter further, I became enthused over the idea. I determined to enlist at once. My position as motorman with the street railroad company was given up. My salary was forty-five dollars a month, as against one-third that amount in the army, but this made little difference to me. I was anxious to be a soldier and live the life of one.

I proceeded to the recruiting office in Dallas to stand an examination, was weighed, then measured all over, every scar was measured, my complexion was noted, my age, place of birth and all about my people were taken. My fingers and toes were twisted and almost pulled off. It occurred to me that possibly my examiners thought my fingers and toes might be artificial. After part of two days' weighing, measuring, finger pulling, toe-twisting and questioning I was pronounced subject and sent to the St. George Hotel, in Dallas, to await further orders. Of twelve applicants who were standing the same examination I was the only successful one. I enlisted under Lieutenant Charles Flammil for a service of three years, unless discharged before the expiration of that time....