A Smaller History of Rome 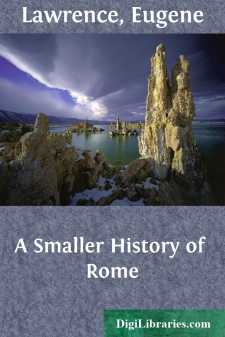 CHAPTER I. GEOGRAPHY OF ITALY—EARLY INHABITANTS.

Italy is the central one of the three great peninsulas which project from the south of Europe into the Mediterranean Sea. It is bounded on the north by the chain of the Alps, which form a natural barrier, and it is surrounded on other sides by the sea. Its shores are washed on the west by the "Mare Inferum," or the Lower Sea, and on the east by the Adriatic, called by the Romans the "Mare Superum," or the Upper Sea. It may be divided into two parts, the northern consisting of the great plain drained by the River Padus, or Po, and its tributaries, and the southern being a long tongue of land, with the Apennines as a back-bone running down its whole extent from north to south. The extreme length of the peninsula from the Alps to the Straits of Messina is 700 miles. The breadth of northern Italy is 350 miles, while that of the southern portion is on an average not more than 100 miles. But, till the time of the Empire, the Romans never included the plain of the Po in Italy. To this country they gave the general name of GALLIA CISALPINA, or Gaul on this (the Roman) side of the Alps, in consequence of its being inhabited by Gauls. The western-most portion of the plain was peopled by Ligurian tribes, and was therefore called LIGURIA, while its eastern extremity formed the Roman province of VENETIA.

The name ITALIA was originally applied to a very small tract of country. It was at first confined to the southern portion of Calabria, and was gradually extended northward, till about the time of the Punic wars it indicated the whole peninsula south of the Rivers Rubicon and Macra, the former separating Cisalpine Gaul and Umbria, the latter Liguria and Etruria. Italy, properly so called, is a very mountainous country, being filled up more or less by the broad mass of the Apennines, the offshoots or lateral branches of which, in some parts, descend quite to the sea, but in others leave a considerable space of level or low country. Excluding the plain of the Po, it was divided into the following districts:

1. ETRURIA, which extended along the coast of the Lower Sea from the River Macra on the north to the Tiber on the south. Inland, the Tiber also formed its eastern boundary, dividing it first from Umbria, afterward from the Sabines, and, lastly, from Latium. Its inhabitants were called Etrusci, or Tusci, the latter form being still preserved in the name of Tuscany. Besides the Tiber it possesses only one other river of any importance, the Arnus, or Arno, upon which the city of Florence now stands. Of its lakes the most considerable is the Lacus Trasimenus, about thirty-six miles in circumference, celebrated for the great victory which Hannibal there gained over the Romans.

2. UMBRIA, situated to the east of Etruria, and extending from the valley of the Tiber to the shores of the Adriatic. It was separated on the north from Gallia Cisalpina by the Rubicon, and on the south by the Æsis from Picenum, and by the Nar from the Sabines....