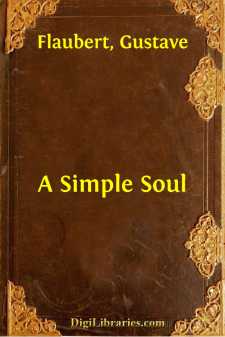 For half a century the housewives of Pont-l'Eveque had envied Madame Aubain her servant Felicite.

For a hundred francs a year, she cooked and did the housework, washed, ironed, mended, harnessed the horse, fattened the poultry, made the butter and remained faithful to her mistress—although the latter was by no means an agreeable person.

Madame Aubain had married a comely youth without any money, who died in the beginning of 1809, leaving her with two young children and a number of debts. She sold all her property excepting the farm of Toucques and the farm of Geffosses, the income of which barely amounted to 5,000 francs; then she left her house in Saint-Melaine, and moved into a less pretentious one which had belonged to her ancestors and stood back of the market-place. This house, with its slate-covered roof, was built between a passage-way and a narrow street that led to the river. The interior was so unevenly graded that it caused people to stumble. A narrow hall separated the kitchen from the parlour, where Madame Aubain sat all day in a straw armchair near the window. Eight mahogany chairs stood in a row against the white wainscoting. An old piano, standing beneath a barometer, was covered with a pyramid of old books and boxes. On either side of the yellow marble mantelpiece, in Louis XV. style, stood a tapestry armchair. The clock represented a temple of Vesta; and the whole room smelled musty, as it was on a lower level than the garden.

On the first floor was Madame's bed-chamber, a large room papered in a flowered design and containing the portrait of Monsieur dressed in the costume of a dandy. It communicated with a smaller room, in which there were two little cribs, without any mattresses. Next, came the parlour (always closed), filled with furniture covered with sheets. Then a hall, which led to the study, where books and papers were piled on the shelves of a book-case that enclosed three quarters of the big black desk. Two panels were entirely hidden under pen-and-ink sketches, Gouache landscapes and Audran engravings, relics of better times and vanished luxury. On the second floor, a garret-window lighted Felicite's room, which looked out upon the meadows.

She arose at daybreak, in order to attend mass, and she worked without interruption until night; then, when dinner was over, the dishes cleared away and the door securely locked, she would bury the log under the ashes and fall asleep in front of the hearth with a rosary in her hand. Nobody could bargain with greater obstinacy, and as for cleanliness, the lustre on her brass sauce-pans was the envy and despair of other servants. She was most economical, and when she ate she would gather up crumbs with the tip of her finger, so that nothing should be wasted of the loaf of bread weighing twelve pounds which was baked especially for her and lasted three weeks.

Summer and winter she wore a dimity kerchief fastened in the back with a pin, a cap which concealed her hair, a red skirt, grey stockings, and an apron with a bib like those worn by hospital nurses....