A Short Method Of Prayer 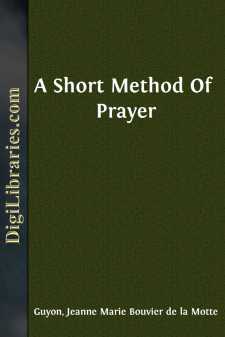 I did not write this little work with the thought of its being given to the public. It was prepared for the help of a few Christians who were desirous of loving God with the whole heart. But so many have requested copies of it, because of the benefit they have derived from its perusal, that I have been asked to publish it.

I have left it in its natural simplicity. I do not condemn the opinions of any: on the contrary, I esteem those which are held by others, and submit all that I have written to the censure of persons of experience and learning. I only ask of all that they will not be content with examining the outside, but that they will penetrate the design of the [p xii] writer, which is only to lead others to LOVE God, and to serve Him with greater happiness and success, by enabling them to do it in a simple and easy way, fit for the little ones who are not capable of extraordinary things, but who truly desire to give themselves to God.

I ask all who may read it, to read without prejudice; and they will discover, under common expressions, a hidden unction, which will lead them to seek for a happiness which all ought to expect to possess.

I use the word facility, saying that perfection is easy, because it is easy to find God, when we seek Him within ourselves. The passage may be quoted which says, “Ye shall seek me, and shall not find me” (John vii. 34). Yet this need not occasion any difficulty; because the same God, who cannot contradict Himself, has said, “He that seeketh findeth” (Matt. vii. 8). He who seeks God, and who yet is unwilling to forsake sin, will not find Him, because he is seeking Him where He cannot be found; therefore it is added, “Ye shall die in your sins.” But he who sincerely desires to forsake [p xiii] sin, that he may draw near to God, will find Him infallibly.

Many people imagine religion so frightful, and prayer so extraordinary, that they are not willing to strive after them, never expecting to attain to them. But as the difficulty which we see in a thing causes us to despair of succeeding in it, and at the same time removes the desire to undertake it; and as, when a thing appears both desirable and easy to be attained, we give ourselves to it with pleasure, and pursue it boldly; I have been constrained to set forth the advantage and the facility of this way.

Oh! if we were persuaded of the goodness of God toward His poor creatures, and of the desire which He has to communicate Himself to them, we should not imagine so many obstacles, and despair so easily of obtaining a good which He is so infinitely desirous of imparting to us.

And if He has not spared His own Son, but delivered Him up for us all, is there anything He can refuse us? Assuredly not. We only need a little courage and perseverance. We have so much [p xiv] of both for trifling temporal interests, and we have none for the “one thing needful.”

As for those who find a difficulty in believing that it is easy to find God in this way, let them not believe all that they are told, but rather let them make trial of it, that they may judge for themselves; and they will find that I say very little in comparison with that which is....