A Short History of Greek Philosophy 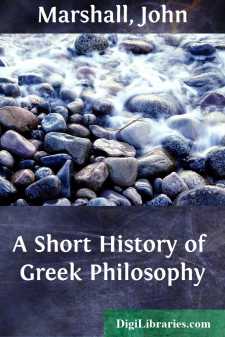 THE SCHOOL OF MILETUS

I. THALES.—For several centuries prior to the great Persian invasions of Greece, perhaps the very greatest and wealthiest city of the Greek world was Miletus. Situate about the centre of the Ionian coasts of Asia Minor, with four magnificent harbours and a strongly defensible position, it gathered to itself much of the great overland trade, which has flowed for thousands of years eastward and westward between India and the Mediterranean; while by its great fleets it created a new world of its own along the Black Sea coast. Its colonies there were so numerous that Miletus was named 'Mother of Eighty Cities.' From Abydus on the Bosphorus, past Sinope, and so onward to the Crimea and the Don, and thence round to Thrace, a busy community of colonies, mining, manufacturing, ship-building, corn-raising, owned Miletus for their mother-city. Its {2} marts must therefore have been crowded with merchants of every country from India to Spain, from Arabia to Russia; the riches and the wonders of every clime must have become familiar to its inhabitants. And fitly enough, therefore, in this city was born the first notable Greek geographer, the first constructor of a map, the first observer of natural and other curiosities, the first recorder of varieties of custom among various communities, the first speculator on the causes of strange phenomena,—Hecataeus. His work is in great part lost, but we know a good deal about it from the frequent references to him and it in the work of his rival and follower, Herodotus.

The city naturally held a leading place politically as well as commercially. Empire in our sense was alien to the instincts of the Greek race; but Miletus was for centuries recognised as the foremost member of a great commercial and political league, the political character of the league becoming more defined, as first the Lydian and then the Persian monarchy became an aggressive neighbour on its borders.

It was in this active, prosperous, enterprising state, and at the period of its highest activity, that Thales, statesman, practical engineer, mathematician, philosopher, flourished. Without attempting to fix his date too closely, we may take it that he was a leading man in Miletus for the greater part of the {3} first half of the sixth century before Christ. We hear of an eclipse predicted by him, of the course of a river usefully changed, of shrewd and profitable handling of the market, of wise advice in the general councils of the league. He seems to have been at once a student of mathematics and an observer of nature, and withal something having analogy with both, an inquirer or speculator into the origin of things. To us nowadays this suggests a student of geology, or physiography, or some such branch of physical science; to Thales it probably rather suggested a theoretical inquiry into the simplest thinkable aspect of things as existing....