A Short History of English Liberalism 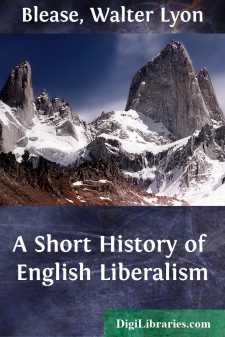 CHAPTER I LIBERALISM AND TORYISM

This book attempts to trace the varying but persistent course of Liberalism in British politics during the last hundred and fifty years. It is not so much a history of events as a reading of them in the light of a particular political philosophy. In the strict sense a history of Liberalism should cover much more than politics. The same habit of mind is to be discovered everywhere else in the history of thought, most conspicuously in religious history, but not less certainly in the history of science and of art. The general victory in these innumerable conflicts of opinion has been to Liberalism, and the movement of the race, during the period with which the writer is concerned, is precisely measured by the degree in which the Liberal spirit has succeeded in modifying the establishments of the preceding age. The object of this book is to investigate the course of that process of modification in politics.

By Liberalism I mean, not a policy, but a habit of mind. It is the disposition of the man who looks upon each of his fellows as of equal worth with himself. He does not assume that all men and women are of equal capacity, or equally entitled to offices and privileges. But he is always inclined to leave and to give them equal opportunity with himself for self-expression and for self-development. He assumes, as the basis of his activity, that he has no right to interfere with any other person's attempts to employ his natural powers in what he conceives to be the best way. He is unwilling to impose his judgment upon that of others, or to force them to live their lives according to his ideas rather than their own. They are never to be used by him for his own ends, but for theirs. Each is to be left to himself, to work out his own salvation. The Liberal habit of mind has its positive as well as its negative side. Just as it leads its possessor to refrain from interfering with the development of others, so it leads him to take active steps to remove the artificial barriers which impede that development. Natural obstacles will remain, though even these may be diminished. But the artificial conditions, which prevent or hinder growth, are perpetually obnoxious to the Liberal. Upon class distinctions in society, privileges of sex, rank, wealth, and creed, he wages unceasing war. They are, in his eye, weights and impediments. To one of two individuals, not distinguishable in natural capacity, they give an advantage which is denied to the other. It is the object of the Liberal, not to deprive any individual of such opportunities as are required for the exercise of his natural powers, but to prevent the excessive appropriation of such opportunities by members of the privileged class. The differences between the practical aims and methods of Liberals at different times are very wide. But the mental habit has always been the same. "The passion for improving mankind, in its ultimate object, does not vary. But the immediate object of reformers and the forms of persuasion by which they seek to advance them, vary much in different generations....