A Ribband of Blue And Other Bible Studies 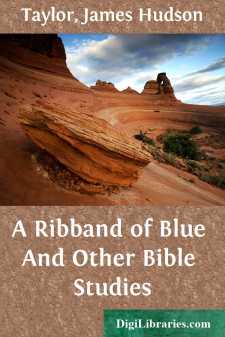 A Ribband Of Blue.

We would draw the attention of beloved friends to the instructive passage with which the fifteenth chapter of Numbers closes; and may GOD, through our meditation on His precious Word, make it yet more precious and practical to each one of us, for CHRIST our REDEEMER'S sake!

The whole chapter is full of important teaching. It commences with instruction concerning the burnt-offering, the sacrifice in performing a vow, and the free-will offering. It was not to be supposed that any one might present his sacrifice to GOD according to his own thought and plan. If it were to be acceptable--a sweet savour unto the LORD--it must be an offering in every respect such as GOD had appointed. We cannot become acceptable to GOD in ways of our own devising; from beginning to end it must be, "Not my will, but Thine, be done."

Then, from the seventeenth to the twenty-first verse, the LORD claims a first-fruits. The people of GOD were not to eat their fill, consume all that they cared to consume, and then give to GOD somewhat of the remainder; but before they touched the bread of the land, a heave-offering was to be offered to the LORD; and when the requirement of GOD had been fully met, then, and not till then, were they at liberty to satisfy their own hunger and supply their own wants. How often we see the reverse of this in daily life! Not only are necessaries first supplied from the income, but every fancied luxury is procured without stint, before the question of the consecration of substance to GOD is really entertained.

Next follow the directions concerning errors from heedlessness and ignorance. The people were not to imagine that sin was not sinful if it were unconsciously committed. Man's knowledge and consciousness do not make wrong right or right wrong. The will of GOD was revealed and ought to have been known: not to know that will was in itself sinful; and not to do that will, whether consciously or unconsciously, was sin--sin that could only be put away by atoning sacrifice.

GOD dealt in much mercy and grace with those who committed sins of ignorance; though, when the sin became known and recognised, confession and sacrifice were immediately needful. But, thank GOD! the sacrifice was ordained, and the sin could be put away.

It was not so with the presumptuous sin. No sacrifice was appointed for a man, whether born in the land or a stranger, who reproached the LORD by presumptuous sin. Of that man it was said, "that soul shall utterly be cut off; his iniquity shall be upon him."

This distinction is very important to make. We are not to think that our holiest service is free from sin, or can be accepted save through JESUS CHRIST our LORD. We are not to suppose that sins of omission, any more than sins of commission, are looked lightly upon by GOD: sins of forgetfulness and heedlessness or ignorance are more than frailties--are real sins, needing atoning sacrifice. GOD deals very gently and graciously with us in these matters; when transgression or iniquity is brought home to the conscience, "if we confess our sins, He is faithful and just to forgive us our sins, and to cleanse us from all unrighteousness." Even when walking in the light, "as He is in the light," we are not beyond the need of atonement....