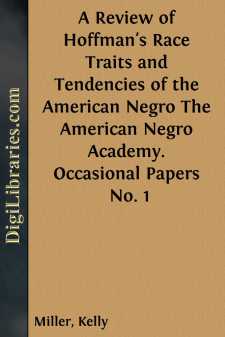 Gist. “For some generations the colored element may continue to make decennial gains, but it is very probable that the next thirty years will be the last to show total gains, and then the decrease will be slow but sure until final disappearance.”

I have taken this quotation from another work by the same author as it represents more clearly than any other condensed statement the substance of the present chapter. This proposition is a most important one, and therefore its establishment needs to be inquired into with the greatest particularity. If a race does not possess the requisite physical stamina, it is impossible for it to maintain a high degree of moral and intellectual culture or compete with its more vigorous rivals in the race of civilization.

“All the elements of society are conserved in its physical basis, the social population.”

Since the author relies mainly upon the eleventh census for facts to establish his conclusion, and since the accuracy of this census is widely controverted, we may fairly call upon him to prove his document before it can be admitted in evidence.

The following quotation from Senator Mills reflects the opinion of many eminent students of public problems as to the accuracy of this enumeration: “The announcement that our population is only 62,662,250 was a genuine surprise, not only to those who looked for the dark side of the picture, but also to those whose faith in the administration and its census bureau had never for a moment wavered. The census of 1880 gave 50,155,783. The present returns give an increase of 12,466,476, which is at the rate of 24.86 per cent. That this number is not even approximately correct may be seen by comparing the increase in this decade with the gain in others which have preceded it. Any alleged fact that is without the pale of probability stands impeached at the very threshold of the inquiry, and must be verified by competent evidence.” Basing his estimates upon the school census, the Senator continues: “The state of Texas is deprived, by the incorrect returns, of at least three representatives in Congress. Alabama loses 240,000, Tennessee and North Carolina 170,000 each, and Virginia, Kentucky, and Louisiana 100,000 each.” Whatever force there may be in the protest of the eloquent Texas Senator, applies with special emphasis to the colored element; for it goes without saying that errors in enumeration in the South would be confined mainly to the Negro race, and since the bulk of the race is confined to this section such errors would have a most disastrous effect upon its rate of increase as shown by the census reports.

The following table exhibits the development of the colored population for the last one hundred years, as well as its decennial rates of increase and percentage of the total population.