A Rebel War Clerk's Diary at the Confederate States Capital 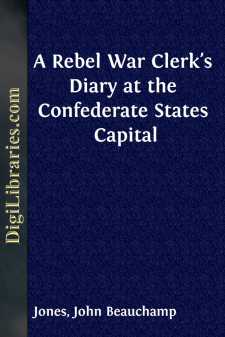 My flight from the North and escape into Virginia.—Revolutionary scene at Richmond.—The Union Convention passes the Ordinance of Secession.—Great excitement prevails in the South.

April 8th, 1861. Burlington, New Jersey.—The expedition sails to-day from New York. Its purpose is to reduce Fort Moultrie, Charleston harbor, and relieve Fort Sumter, invested by the Confederate forces. Southern born, and editor of the Southern Monitor, there seems to be no alternative but to depart immediately. For years the Southern Monitor, Philadelphia, whose motto was “The Union as it was, the Constitution as it is,” has foreseen and foretold the resistance of the Southern States, in the event of the success of a sectional party inimical to the institution of African slavery, upon which the welfare and existence of the Southern people seem to depend. And I must depart immediately; for I well know that the first gun fired at Fort Sumter will be the signal for an outburst of ungovernable fury, and I should be seized and thrown into prison.

I must leave my family—my property—everything. My family cannot go with me—but they may follow. The storm will not break in its fury for a month or so. Only the most obnoxious persons, deemed dangerous, will be molested immediately.

8 o’clock p.m.—My wife and children have been busy packing my trunk, and making other preparations for my departure. They are cheerful. They deem the rupture of the States a fait accompli, but reck not of the horrors of war. They have contrived to pack up, with other things, my fine old portrait of Calhoun, by Jarvis. But I must leave my papers, the accumulation of twenty-five years, comprising thousands of letters from predestined rebels. My wife opposes my suggestion that they be burned. Among them are some of the veto messages of President Tyler, and many letters from him, Governor Wise, etc. With the latter I had a correspondence in 1856, showing that this blow would probably have been struck then, if Fremont had been elected.

April 9th.—My adieus over, I set out in the broad light of day. When the cars arrived at Camden, I proceeded, with the rest of the through passengers, in the boat to the navy yard, without going ashore in the city. The passengers were strangers to me. Many could be easily recognized as Southern men; but quite as many were going only as far as Washington, for their reward. They were bold denouncers of the rebellion; the others were silent, thoughtful, but in earnest.

The first thing which attracted my attention, as the cars left the Delaware depot, was a sign-board on my left, inscribed in large letters, “Union Cemetery.” My gaze attracted the notice of others. A mocking bon-mot was uttered by a Yankee wit, which was followed by laughter.

For many hours I was plunged in the deepest abstraction, and spoke not a word until we were entering the depot at Washington, just as the veil of night was falling over the scene.

Then I was aroused by the announcement of a conductor that, failing to have my trunk rechecked at Baltimore, it had been left in that city! Determined not to lose it, I took the return train to Baltimore, and put up at Barnum’s Hotel. Here I met with Mr. Abell, publisher of the Baltimore Sun, an old acquaintance. Somewhat contrary to my expectations, knowing him to be a native of the North, I found him an ardent secessionist. So enthusiastic was he in the cause, that he denounced both Maryland and Virginia for their hesitancy in following the example of the Cotton States; and he invited me to furnish his paper with correspondence from Montgomery, or any places in the South where I might be a sojourner.

April 10th.—Making an early start this morning, I once more arrived at Washington City. I saw no evidences of a military force in the city, and supposed the little army to be encamped at the west end of the Avenue, guarding the Executive Mansion.

We took an omnibus without delay and proceeded to the steamer. As soon as we left the shore, I fancied I saw many of the passengers breathing easier and more deeply. Certainly there was more vivacity, since we were relieved of the presence of Republicans. And at the breakfast table there was a freer flow of speech, and a very decided manifestation of secession proclivities.

Among the passengers was Major Holmes, who had just resigned his commission in the U. S. army. He had been ordered to proceed with the expedition against Charleston; but declined the honor of fighting against his native land. The major is a little deaf, but has an intellectual face, the predominant expression indicating the discretion and prudence so necessary for success in a large field of operations....