A Question of Marriage 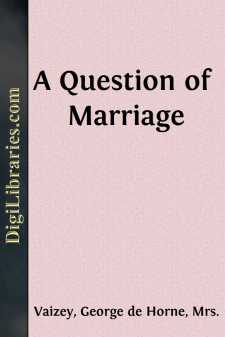 Chapter One. The Ban.

The grey London sunlight shone on the face of the patient as she sat facing the long window of the consulting-room, on the finely cut features, sensitive lips, and clear, dilated eyes. The doctor sat in the shadow, leaning back in his chair, tapping softly with his fingers upon the desk.

“And you must not be afraid,” he said, following a vigorous cross-questioning with his skilled advice. “That is the most important lesson which you have to learn. Banish fear. Live it down; if necessary, crowd it out. Don’t allow yourself time to think and grow morbid. I tell you frankly that the chances are quite good that you may entirely escape this curse of your family, but you must understand that the power is in your own hands to increase or diminish those chances. Anxiety, depression, loneliness—these will be your worst enemies. You say that you have sufficient means; that makes things easier all round. Cultivate interests; cultivate friends. Search for congenial occupation, and when you have found it—work! Work hard; hard enough to make rest grateful when the day is over, and sleep sound—not hard enough to feel worn out. Avoid fatigue as carefully as you would idleness. Take a good holiday twice a year, and as many little breaks as possible. Be a hard task-mistress of your mind, but of your body a careful, even an indulgent, guardian. The two continually act and react on each other. A diseased mind imagines illness where there is none; a diseased body taints and demoralises the mind. Look after both. You must allow yourself to be somewhat self-indulgent as regards health. There will be other matters which will demand all your courage and self-denial...”

The girl did not speak, but her eyelashes flickered nervously over her dilated eyes. The doctor looked down at the tips of those tapping fingers.

“Marriage,” he said slowly—“Marriage is not for you. It is better that you should face that fact at once. Such a family history as the one you have just related is a standing evidence of selfishness and cruelty. Your parents, your grandparents, outraged a great moral law, and you and others are here to pay the price. You must not follow their example. This handing on of disease must come to an end. You may think that in the case of your possible marriage there might not be children; I will not discuss that point to-day—it is not needful. You are my patient, and you yourself would run a more serious risk of developing the malady as a wife. Even the happiest of married lives has responsibilities, anxieties, physical and mental strains, which might easily prove too much for your mental balance. It would not be fair to a man to bring that dread into his life. Marriage for you would be a cruel and cowardly act. For the man’s sake, for your own sake, you must put the idea out of your life.”

There was a moment’s silence in the room, then the girl spoke in a low, faint voice:

“Thank you!” she said softly. With a hand that moved in mechanical fashion she took a little paper packet from her muff, laid it down on the corner of the desk, and rose to her feet....