A Publisher and His Friends Memoir and Correspondence of John Murray; with an Account of the Origin and Progress of the House, 1768-1843 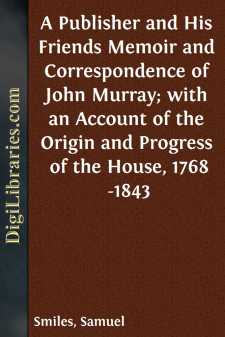 CHAPTER I JOHN MACMURRAY OR MURRAY

The publishing house of Murray dates from the year 1768, in which year John MacMurray, a lieutenant of Marines, having retired from the service on half-pay, purchased the bookselling business of William Sandby, at the sign of the "Ship," No. 32, Fleet Street, opposite St. Dunstan's Church.

John MacMurray was descended from the Murrays of Athol. His uncle, Colonel Murray, was "out" in the rising of 1715, under the Earl of Mar, served under the Marquis of Tullibardine, the son of his chief, the Duke of Athol, and led a regiment in the abortive fight of Sheriffmuir. After the rebellion Colonel Murray retired to France, where he served under the exiled Duke of Ormonde, who had attached himself to the Stuart Court.

The Colonel's brother Robert followed a safer course. He prefixed the "Mac" to his name; settled in Edinburgh; adopted the law as a profession, and became a Writer to the Signet. He had a family of three daughters, Catherine, Robina, and Mary Anne; and two sons, Andrew and John.

John, the younger of Robert MacMurray's sons, was born at Edinburgh in 1745. After receiving a good general education, he entered the Royal Marines under the special patronage of Sir George Yonge, Bart., [Footnote: Sir George Yonge was Governor of the Cape of Good Hope, and subsequently Secretary at War; he died in 1812.] a well-known official of the last century, and his commission as second lieutenant was dated June 24, 1762. Peace was signed at the treaty of Paris in 1763, and young MacMurray found himself quartered at Chatham, where the monotony of the life to a young man of an active and energetic temperament became almost intolerable. He determined therefore to retire on half-pay at the age of twenty-three, and become a London bookseller!

It is not improbable that he was induced to embark on his proposed enterprise by his recent marriage with Nancy Wemyss, daughter of Captain Wemyss, then residing at Brompton, near Chatham.

While residing at Chatham, MacMurray renewed his acquaintance with William Falconer, the poet, and author of "The Shipwreck," who, like himself, was a native of Edinburgh.

To this friend, who was then on the eve of sailing to India, he wrote:

Since I saw you, I have had the intention of embarking in a scheme that I think will prove successful, and in the progress of which I had an eye towards your participating. Mr. Sandby, Bookseller, opposite St. Dunstan's Church, Fleet Street, has entered into company with Snow and Denne, Bankers. I was introduced to this gentleman about a week ago, upon an advantageous offer of succeeding him in his old business; which, by the advice of my friends, I propose to accept. Now, although I have little reason to fear success by myself in this undertaking, yet I think so many additional advantages would accrue to us both, were your forces and mine joined, that I cannot help mentioning it to you, and making you the offer of entering into company....