A Proposal for the Better Supplying of Churches in Our Foreign Plantations, and for Converting the Savage Americans to Christianity 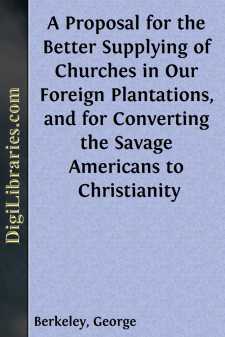 lthough there are several excellent persons of the church of England, whose good intentions and endeavours have not been wanting to propagate the gospel in foreign parts, who have even combined into societies for that very purpose, and given great encouragement, not only for English missionaries in the West-Indies, but also, for the reformed of other nations, led by their example, to propagate christianity in the East: It is nevertheless acknowledged, that there is at this day, but little sense of religion, and a most notorious corruption of manners, in the English colonies settled on the continent of America, and the islands. It is also acknowledged, that the gospel hath hitherto made but a very inconsiderable progress among the neighbouring Americans, who still continue in much-what the same ignorance and barbarism, in which we found them above a hundred years ago.

I shall therefore venture to submit my thoughts upon a point, that I have long consider'd, to better judgments, in hopes that any expedient will be favourably hearkned to, which is proposed for the remedy of these evils. Now in order to effect this, it should seem the natural proper method, to provide, in the first place, a constant supply of worthy clergy-men for the English churches in those parts; and in the second place, a like constant supply of zealous missionaries well fitted for propagating Christianity among the savages.

For though the surest means to reform the morals, and soften the behaviour of men, be, to preach to them the pure uncorrupt doctrine of the gospel, yet it cannot be denied that the success of preaching dependeth in good measure on the character and skill of the preacher: Forasmuch as mankind are more apt to copy characters than to practise precepts, and forasmuch as argument, to attain its full strength, doth not less require the life of zeal, than the weight of reason; and the same doctrine, which maketh great impression, when delivered with decency and address, loseth very much of its force by passing through aukward or unskilful hands.

Now the clergy sent over to America have proved, too many of them, very meanly qualified both in learning and morals for the discharge of their office. And indeed little can be expected from the example or instruction of those, who quit their native country on no other motive, than that they are not able to procure a livelihood in it, which is known to be often the case.

To this may be imputed the small care that hath been taken to convert the negroes of our plantations, who, to the infamy of England, and scandal of the world, continue Heathen under Christian masters, and in Christian countries. Which cou'd never be, if our planters were rightly instructed and made sensible, that they disappointed their own baptism by denying it to those who belong to them:

That it would be of advantage to their affairs, to have slaves who should obey in all things their masters according to the flesh, not with eye-service as men-pleasers, but, in singleness of heart as fearing God: That gospel liberty consists with temporal servitude: and that their slaves would only become better slaves by being Christian.

And though it be allowed that some of the clergy in our colonies have approved themselves men of merit, it will at the same time be allowed, that the most zealous and able missionary from England must find himself but ill qualified for converting the American Heathen, if we consider the difference of language, their wild way of living, and above all, the great jealousy and prejudice which savage nations have towards foreigners, or innovations introduced by them.

These considerations make it evident, that a college or seminary in those parts is very much wanted; and therefore the providing such a seminary, is earnestly proposed and recommended to all those, who have it in their power, to contribute to so good a work....