A Problem in Modern Ethics being an inquiry into the phenomenon of sexual inversion, addressed especially to Medical Psychologists and Jurists 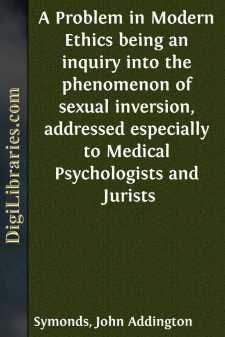 There is a passion, or a perversion of appetite, which, like all human passions, has played a considerable part in the world's history for good or evil; but which has hardly yet received the philosophical attention and the scientific investigation it deserves. The reason of this may be that in all Christian societies the passion under consideration has been condemned to pariahdom; consequently, philosophy and science have not deigned to make it the subject of special enquiry. Only one great race in past ages, the Greek race, to whom we owe the inheritance of our ideas, succeeded in raising it to the level of chivalrous enthusiasm. Nevertheless, we find it present everywhere and in all periods of history. We cannot take up the religious books, the legal codes, the annals, the descriptions of the manners of any nation, whether large or small, powerful or feeble, civilised or savage, without meeting with this passion in one form or other. Sometimes it assumes the calm and dignified attitude of conscious merit, as in Sparta, Athens, Thebes. Sometimes it skulks in holes and corners, hiding an abashed head and shrinking from the light of day, as in the capitals of modern Europe. It confronts us on the steppes of Asia, where hordes of nomads drink the milk of mares; in the bivouac of Keltish warriors, lying wrapped in wolves' skins round their camp-fires; upon the sands of Arabia, where the Bedaween raise desert dust in flying squadrons. We discern it among the palm-groves of the South Sea Islands, in the card-houses and temple-gardens of Japan, under Esquimaux snow-huts, beneath the sultry vegetation of Peru, beside the streams of Shiraz and the waters of the Ganges, in the cold clear air of Scandinavian winters. It throbs in our huge cities. The pulse of it can be felt in London, Paris, Berlin, Vienna, no less than in Constantinople, Naples, Teheran, and Moscow. It finds a home in Alpine valleys, Albanian ravines, Californian canyons, and gorges of Caucasian mountains. It once sat, clothed in Imperial purple, on the throne of the Roman Caesars, crowned with the tiara on the chair of St. Peter. It has flaunted, emblazoned with the heraldries of France and England, in coronation ceremonies at Rheims and Westminster. The royal palaces of Madrid and Aranjuez tell their tales of it. So do the ruined courtyards of Granada and the castle-keep of Avignon. It shone with clear radiance in the gymnasium of Hellas, and nerved the dying heroes of Greek freedom for their last forlorn hope upon the plains of Chæronea. Endowed with inextinguishable life, in spite of all that has been done to suppress it, this passion survives at large in modern states and towns, penetrates society, makes itself felt in every quarter of the globe where men are brought into communion with men.

Yet no one dares to speak of it; or if they do, they bate their breath, and preface their remarks with maledictions.

Those who read these lines will hardly doubt what passion it is that I am hinting at. Quod semper ubique et ab omnibus—surely it deserves a name. Yet I can hardly find a name which will not seem to soil this paper. The accomplished languages of Europe in the nineteenth century supply no term for this persistent feature of human psychology, without importing some implication of disgust, disgrace, vituperation. Science, however, has recently—within the last twenty years in fact—invented a convenient phrase, which does not prejudice the matter under consideration. She speaks of the "inverted sexual instinct"; and with this neutral nomenclature the investigator has good reason to be satisfied.

Inverted sexuality, the sexual instinct diverted from its normal channel, directed (in the case of males) to males, forms the topic of the following discourse. The study will be confined to modern times, and to those nations which regard the phenomenon with religious detestation. This renders the enquiry peculiarly difficult, and exposes the enquirer, unless he be a professed expert in diseases of the mind and nervous centres, to almost certain misconstruction. Still, there is no valid reason why the task of statement and analysis should not be undertaken. Indeed, one might rather wonder why candid and curious observers of humanity have not attempted to fathom a problem which faces them at every turn in their historical researches and in daily life....