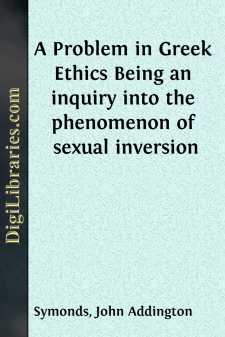 For the student of sexual inversion, ancient Greece offers a wide field for observation and reflection. Its importance has hitherto been underrated by medical and legal writers on the subject, who do not seem to be aware that here alone in history have we the example of a great and highly-developed race not only tolerating homosexual passions, but deeming them of spiritual value, and attempting to utilise them for the benefit of society. Here, also, through the copious stores of literature at our disposal, we can arrive at something definite regarding the various forms assumed by these passions, when allowed free scope for development in the midst of refined and intellectual civilisation. What the Greeks called paiderastia, or boy-love, was a phenomenon of one of the most brilliant periods of human culture, in one of the most highly organised and nobly active nations. It is the feature by which Greek social life is most sharply distinguished from that of any other people approaching the Hellenes in moral or mental distinction. To trace the history of so remarkable a custom in their several communities, and to ascertain, so far as this is possible, the ethical feeling of the Greeks upon this subject, must be of service to the scientific psychologist. It enables him to approach the subject from another point of view than that usually adopted by modern jurists, psychiatrists, writers on forensic medicine.

The first fact which the student has to notice is that in the Homeric poems a modern reader finds no trace of this passion. It is true that Achilles, the hero of the Iliad, is distinguished by his friendship for Patroclus no less emphatically than Odysseus, the hero of the Odyssey, by lifelong attachment to Penelope, and Hector by love for Andromache. But in the delineation of the friendship of Achilles and Patroclus there is nothing which indicates the passionate relation of the lover and the beloved, as they were afterwards recognised in Greek society. This is the more remarkable because the love of Achilles for Patroclus added, in a later age of Greek history, an almost religious sanction of the martial form of paiderastia. In like manner the friendship of Idomeneus for Meriones, and that of Achilles, after the death of Patroclus, for Antilochus, were treated by the later Greeks as paiderastic. Yet, inasmuch as Homer gives no warrant for this interpretation of the tales in question, we are justified in concluding that homosexual relations were not prominent in the so-called heroic age of Greece. Had it formed a distinct feature of the society depicted in the Homeric poems, there is no reason to suppose that their authors would have abstained from delineating it. We shall see that Pindar, Æschylus and Sophocles, the poets of an age when paiderastia was prevalent, spoke unreservedly upon the subject.

Impartial study of the Iliad leads us to the belief that the Greeks of the historic period interpreted the friendship of Achilles and Patroclus in accordance with subsequently developed customs. The Homeric poems were the Bible of the Greeks, and formed the staple of their education; nor did they scruple to wrest the sense of the original, reading, like modern Bibliolaters, the sentiments and passions of a later age into the text. Of this process a good example is afforded by Æschines in the oration against Timarchus. While discussing this very question of the love of Achilles, he says: "He, indeed, conceals their love, and does not give its proper name to the affection between them, judging that the extremity of their fondness would be intelligible to instructed men among his audience." As an instance the orator proceeds to quote the passage in which Achilles laments that he will not be able to fulfil his promise to Menœtius by bringing Patroclus home to Opus. He is here clearly introducing the sentiments of an Athenian hoplite who had taken the boy he loved to Syracuse and seen him slain there.

Homer stood in a double relation to the historical Greeks. On the one hand, he determined their development by the influence of his ideal characters. On the other, he underwent from them interpretations which varied with the spirit of each successive century. He created the national temperament, but received in turn the influx of new thoughts and emotions occurring in the course of its expansion. It is, therefore, highly important, on the threshold of this inquiry, to determine the nature of that Achilleian friendship to which the panegyrists and apologists of the custom make such frequent reference....