A Princess in Calico 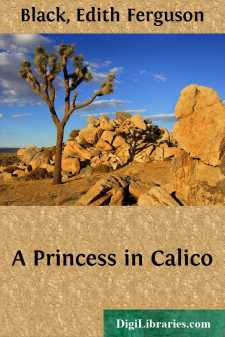 She stood at her bedroom window before going downstairs to take up the burden of a new day. She was just seventeen, but they did not keep any account of anniversaries at Hickory Farm. The sun had given her a loving glance as he lifted his bright old face above the horizon, but her father was too busy and careworn to remember, and, since her mother had gone away, there was no one else. She had read of the birthdays of other girls, full of strange, sweet surprises, and tender thoughts—but those were girls with mothers. A smile like a stray beam of sunshine drifted over her troubled young face, at the thought of the second Mrs Harding stopping for one instant in her round of ponderous toil to note the fact that one of her family had reached another milestone in life’s journey. Certainly not on washing day, when every energy was absorbed in the elimination of impurity from her household linen, and life looked grotesque and hazy through clouds of soapy steam.

She heard her father now putting on the heavy pots of water, and then watched him cross the chip-yard to the barn. How bent and old he looked. Did he ever repent of his step? she wondered. Life could not be much to him any more than it was to her, and he had known her mother! Oh! why could he not have waited? She would soon have been old enough to keep house for him.

The minister had spoken the day before of a heaven where people were, presumably, to find their height of enjoyment in an eternity of rest. She supposed that was the best of it. Old Mrs Goodenough was always sighing for rest, and Deacon Croaker prayed every week to be set free from the trials and tribulations of this present evil world, and brought into everlasting peace. An endless passivity seemed a dreary outlook to her active soul, which was sighing to plume its cramped wings, and soar among the endless possibilities of earth: it seemed strange that there should be no wonders to explore in heaven. Well, death was sure, anyway, and after all there was nothing in life—her life—but hard work, an ever-recurring round of the same thing. She thought she could have stood it better if there had been variety. Death was sure to come, sometime, but people lived to be eighty, and she was so very young. Still, perhaps monotony might prove as fatal as heart failure. She thought it would with her—she was so terribly tired. Ever since she could remember she had looked out of this same window as the sun rose, and wondered if something would happen to her as it did to other girls, but the day went past in the same dull routine. So many plates to wash, and the darning basket seemed to grow larger each year, and the babies were so heavy. She had read somewhere that ‘all earnest, pure, unselfish men who lived their lives well, helped to form the hero—God let none of them be wasted. A thousand unrecorded patriots helped to make Wellington.’ It seemed to her Wellington had the best of it.