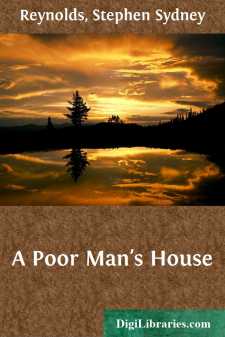 The substance of "A Poor Man's House" was first recorded in a journal, kept for purposes of fiction, and in letters to one of the friends to whom the book is dedicated. Fiction, however, showed itself an inappropriate medium. I was unwilling to cut about the material, to modify the characters, in order to meet the exigencies of plot, form, and so on. I felt that the life and the people were so much better than anything I could invent. Besides which, I found myself in possession of conclusions, hot for expression, which could not be incorporated at all into fiction. "A Poor Man's House" consists then of the journal and letters, subjected to such slight re-arrangement as should enable me to draw the truest picture I could within the limits of one volume.

Primarily the book aims at presenting a picture of a typical poor man's house and life. Incidentally, certain conclusions are expressed which—needless to say—are very tentative and are founded not alone on this poor man's house. Of the book as a picture, it is not the author's place to speak. But its opinions, and the manner of arriving at them, do require some explanation; the right to hold such opinions some substantiation.

Educated people usually deal with the poor man's life deductively; they reason from the general to the particular; and, starting with a theory, religious, philanthropic, political, or what not, they seek, and too easily find, among the millions of poor, specimens—very frequently abnormal—to illustrate their theories. With anything but human beings, that is an excellent method. Human beings, unfortunately, have individualities. They do what, theoretically, they ought not to do, and leave undone those things they ought to do. They are even said to possess souls—untrustworthy things beyond the reach of sociologists. The inductive method—reasoning from the particular to the general—though it lead to a fine crop of errors, should at least help to counterbalance the psychological superficiality of the deductive method; to counterbalance, for example, the nonsense of those well-meaning persons who go routing about among the poor in search of evil, and suppose that they can chain it up with little laws. Chained dogs bite worst.

For myself, I can only claim—I only want to claim—that I have lived among poor people without preconceived notions or parti pris; neither as parson, philanthropist, politician, inspector, sociologist nor statistician; but simply because I found there a home and more beauty of life and more happiness than I had met with elsewhere. So far as is possible to a man of middle-class breeding, I have lived their life, have shared their interests, and have found among them some of my closest and wisest friends. Perhaps I may reasonably anticipate one type of criticism by adding that I have felt something of the pinch and hardship of the life, as well as enjoyed its picturesqueness. Since the book was first written, it has fallen to me, on an occasion of illness, to take over for some days all the housekeeping and cooking; and I have worked on the boats sometimes fifteen hours a day, not as an amateur, but for hard and—what is more to the point—badly-needed coin....