A Political History of the State of New York, Volumes 1-3 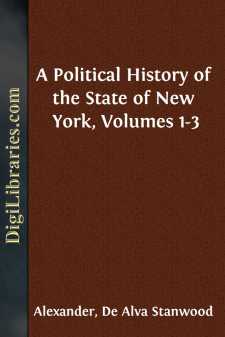 The preparation of this work was suggested to the author by the difficulty he experienced in obtaining an accurate knowledge of the movements of political parties and their leaders in the Empire State. "After living a dozen years in New York," wrote Oliver Wolcott, who had been one of Washington's Cabinet, and was afterwards governor of Connecticut, "I don't pretend to comprehend their politics. It is a labyrinth of wheels within wheels, and it is understood only by the managers." Wolcott referred to the early decades of the last century, when Clintonian and Bucktail, gradually absorbing the Federalists, severed the old Republican party into warring factions. In later years, Daniel S. Dickinson spoke of "the tangled web of New York politics"; and Horace Greeley complained of "the zigzag, wavering lines and uncouth political designations which puzzled and wearied readers" from 1840 to 1860, when Democrats divided into Conservatives and Radicals, Hunkers and Barnburners, and Hards and Softs; and when Whigs were known as Conscience and Cotton, and Woollies and Silver Grays. More recently James Parton, in his Life of Andrew Jackson, speaks of "that most unfathomable of subjects, the politics of the State of New York."

There is no attempt in this history to catalogue the prominent public men of New York State. Such a list would itself fill a volume. It has only been possible, in the limited space given to over a century, to linger here and there in the company of the famous figures who rose conspicuously above their fellow men and asserted themselves masterfully in influencing public thought and action. Indeed, the history of a State or nation is largely the history of a few leading men, and it is of such men only, with some of their more prominent contemporaries, that the author has attempted to write.

It would be hard to find in any Commonwealth of the Union a more interesting or picturesque leadership than is presented in the political history of the Empire State. Rarely more than two controlling spirits appear at a time, and as these pass into apogee younger men of approved capacity are ready to take their places. None had a meteoric rise, but in his day each became an absolute party boss; for the Constitution of 1777, by creating the Council of Appointment, opened wide the door to bossism. The abolition of the Council in 1821 doubtless made individual control more difficult, but the system left its methods so deeply impressed upon party management that what before was done under the sanction of law, ever after continued under the cover of custom.

After the Revolution, George Clinton and Alexander Hamilton led the opposing political forces, and while Aaron Burr was forging to the front, the great genius of DeWitt Clinton, the nephew of George Clinton, began asserting itself. The defeat of Burr for governor, and the death of Hamilton would have left DeWitt Clinton in complete control, had he found a strong man for governor whom he could use. In 1812 Martin Van Buren discovered superiority as a manager, and for nearly two decades, until the death of the distinguished canal builder, his great ability was taxed to its uttermost in the memorable contests between Bucktails and Clintonians....