A Philosophicall Essay for the Reunion of the Languages Or, The Art of Knowing All by the Mastery of One 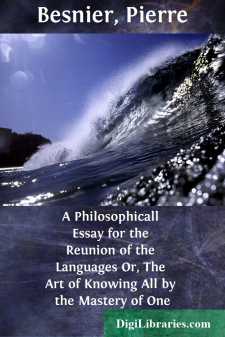 Meeting by chance with this ingenuous offer, I thought it might not be improper since I found it in another dresse, to make it speak another Language too, which among the most creditable of Europe, hath not desisted from its claim to Antiquity: There are very few Nations but have, at sometime or other, laid in their pretences to a supremacy for their Language, and have boasted an assistance from unsuspected reason and Authority: But however variously the controversie hath been manag'd, the modesty, and ingenuity of this Author hath rendred, his designe more plausible, for having without any private regard (in such cases most usuall to the spruce and flourishing Air of his owne Native tongue) made that noble Language of the Romans the Basis of his project; And finding him throughout altogether free from prejudice and partiality, I thought an anteview of so excellent and usefull, a designe would not be unacceptable to the more ingenious part of the world, and that I ought not to neglect so faire an opportunity of recommending to their consideration that illustrious dialect, which as it is certainly of all others the most valuable, so to the shame of these modern ages, is either exceedingly impair'd or lost in its familiar uses among those who challenge the title of the Beaux Esprits of the times. The aime therefore of this Projector being to facilitate and expedite the Mastery of this as well as others, its survey may possibly appear not altogether ungratefull if it be but in hopes to find this incouragement that we shall he able to reserve some number of years from our usually tædious application to its study for other eminent uses, and commence men & Schollers at a much easier rate and in an earlier age then now commonly practic'd; I should prevent the Author if I should entertaine you with any farther commendation of it then that he hath taken for his model the most creditable and plausible Language of the world. If at any time you divert your selfe with reading Novels; you will here meet with notions that are both Philosophicall and Airy, and in order to the maine designe for the most part purely scientifick and demonstrative; and after if all you shall think that you have not mispent your time by observing something that is either a usefull or pleasurable I shall have my designe and the Author the credit.

As the Knowledge of forreign Languages ought not to be reputed one of those vain and useless curiosities that serve only to amuse the mind, but is certainly conducive to a thousand different ends; so we ought not to think it strange if our age, which gives such æquall and secure judgement of the value of things shew more of passion then ever for it, notwithstanding all the difficulties that are pretended. I am of an opinion, that one cannot do the world a more acceptable piece of service, then to invent a certain and easie way to become universally acquainted with the Languages, and to quit a subject from those intrigues, in which the more knowing have at present involv'd it, either from a pure impotence to disingage it, or possibly from a fond desire of a freer breath of popular Air from those who are ordinarily most taken with what they least understand....