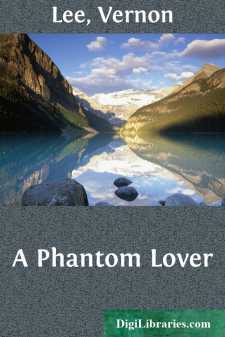 That sketch up there with the boy's cap? Yes; that's the same woman. I wonder whether you could guess who she was. A singular being, is she not? The most marvellous creature, quite, that I have ever met: a wonderful elegance, exotic, far-fetched, poignant; an artificial perverse sort of grace and research in every outline and movement and arrangement of head and neck, and hands and fingers. Here are a lot of pencil sketches I made while I was preparing to paint her portrait. Yes; there's nothing but her in the whole sketchbook. Mere scratches, but they may give some idea of her marvellous, fantastic kind of grace. Here she is leaning over the staircase, and here sitting in the swing. Here she is walking quickly out of the room. That's her head. You see she isn't really handsome; her forehead is too big, and her nose too short. This gives no idea of her. It was altogether a question of movement. Look at the strange cheeks, hollow and rather flat; well, when she smiled she had the most marvellous dimples here. There was something exquisite and uncanny about it. Yes; I began the picture, but it was never finished. I did the husband first. I wonder who has his likeness now? Help me to move these pictures away from the wall. Thanks. This is her portrait; a huge wreck. I don't suppose you can make much of it; it is merely blocked in, and seems quite mad. You see my idea was to make her leaning against a wall—there was one hung with yellow that seemed almost brown—so as to bring out the silhouette.

It was very singular I should have chosen that particular wall. It does look rather insane in this condition, but I like it; it has something of her. I would frame it and hang it up, only people would ask questions. Yes; you have guessed quite right—it is Mrs. Oke of Okehurst. I forgot you had relations in that part of the country; besides, I suppose the newspapers were full of it at the time. You didn't know that it all took place under my eyes? I can scarcely believe now that it did: it all seems so distant, vivid but unreal, like a thing of my own invention. It really was much stranger than any one guessed. People could no more understand it than they could understand her. I doubt whether any one ever understood Alice Oke besides myself. You mustn't think me unfeeling. She was a marvellous, weird, exquisite creature, but one couldn't feel sorry for her. I felt much sorrier for the wretched creature of a husband. It seemed such an appropriate end for her; I fancy she would have liked it could she have known. Ah! I shall never have another chance of painting such a portrait as I wanted. She seemed sent me from heaven or the other place. You have never heard the story in detail? Well, I don't usually mention it, because people are so brutally stupid or sentimental; but I'll tell it you. Let me see. It's too dark to paint any more today, so I can tell it you now. Wait; I must turn her face to the wall. Ah, she was a marvellous creature!

You remember, three years ago, my telling you I had let myself in for painting a couple of Kentish squireen?...