A Peep Behind the Scenes 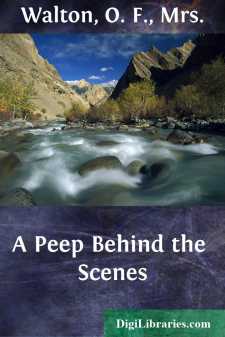 Rain, rain, rain! How mercilessly it fell on the Fair-field that Sunday afternoon! Every moment the pools increased and the mud became thicker. How dismal the fair looked then! On Saturday evening it had been brilliantly lighted with rows of flaring naphtha-lights; and the grand shows, in the most aristocratic part of the field, had been illuminated with crosses, stars, anchors, and all manner of devices.

But there were no lights now; there was nothing to cast a halo round the dirty, weather-stained tents and the dingy caravans.

Yet, in spite of this, and in spite of the rain, a crowd of Sunday idlers lingered about the fair, looking with great interest at the half-covered whirligigs and bicycles, peeping curiously into the deserted shows, and making many schemes for further enjoyment on the morrow, when the fair was once more to be in its glory.

Inside the caravans the show-people were crouching over their fires and grumbling at the weather, murmuring at having to pay so much for the ground on which their shows were erected, at a time when they would be likely to make so little profit.

A little old man, with a rosy, good-tempered face, was making his way across the sea of mud which divided the shows from each other. He was evidently no idler in the fair; he had come into it that Sunday afternoon for a definite purpose, and he did not intend to leave it until it was accomplished. After crossing an almost impassable place, he climbed the steps leading to one of the caravans and knocked at the door.

It was a curious door; the upper part of it, being used as a window, was filled with glass, behind which you could see two small muslin curtains, tied up with pink ribbon. No one came to open the door when the old man knocked, and he was about to turn away, when some little boys, who were standing near, called out to him—

'Rap again, sir, rap again; there's a little lass in there; she went in a bit since.'

'Don't you wish you was her?' said one of the little boys to the other.

'Ay!' said the little fellow; 'I wish our house would move about, and had little windows with white curtains and pink bows!'

The old man laughed a hearty laugh at the children's talk, and rapped again at the caravan door.

This time a face appeared between the muslin curtains and peered cautiously out. It was a very pretty little face, so pretty that the old man sighed to himself when he saw it.

Then the small head turned round, and seemed to be telling what it had seen to some one within, and asking leave to admit the visitor; for a minute afterwards the door was opened, and the owner of the pretty face stood before the old man.

She was a little girl about twelve years of age, very slender and delicate in appearance. Her hair, which was of a rich auburn colour, was hanging down to her waist, and her eyes were the most beautiful the old man thought he had ever seen.

She was very poorly dressed, and she shivered as the damp, cold air rushed in through the open door.