A New System; or, an Analysis of Antient Mythology. Volume II. (of VI.) 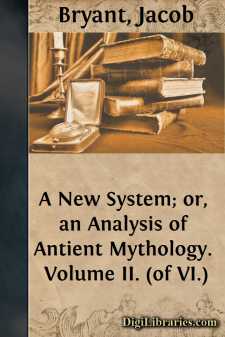 As there has been much uncertainty about the purport and extent of these terms; and they are of great consequence in the course of history; I will endeavour to state their true meaning. Phoinic, or Poinic, was an Egyptian and Canaanitish term of honour; from whence were formed Φοινιξ, Φοινικες, Φοινικοεις of the Greeks, and Phoinic, Poinicus, Poinicius of the Romans; which were afterwards changed to Phœnix, Punicus, and Puniceus. It was originally a title, which the Greeks made use of as a provincial name: but it was never admitted as such by the people, to whom it was thus appropriated, till the Greeks were in possession of the country. And even then it was but partially received: for though mention is made of the coast of Phœnice, yet we find the natives called Sidonians, Tyrians, and Canaanites, as late as the days of the Apostles. It was an honorary term, compounded of Anac with the Egyptian prefix; and rendered at times both Phoinic and Poinic. It signified a lord or prince: and was particularly assumed by the sons of Chus and Canaan. The Mysians seem to have kept nearest to the original pronunciation, who gave this title to the God Dionusus, and called him Ph'anac.

It was also conferred upon many things, which were esteemed princely and noble. Hence the red, or scarlet, a colour appropriated to great and honourable personages, was styled Phoinic. The palm was also styled Phoinic, Φοινιξ: and the antients always speak of it as a stately and noble tree. It was esteemed an emblem of honour; and made use of as a reward of victory. Plurimarum palmarum homo, was a proverbial expression among the Romans, for a soldier of merit. Pliny speaks of the various species of palms; and of the great repute in which they were held by the Babylonians. He says, that the noblest of them were styled the royal Palms; and supposes that they were so called from their being set apart for the king's use. But they were very early an emblem of royalty: and it is a circumstance included in their original name. We find from Apuleius, that Mercury, the Hermes of Egypt, was represented with a palm branch in his hand: and his priests at Hermopolis used to have them stuck in their sandals, on the outside. The Goddess Isis was thus represented: and we may infer that Hermes had the like ornaments; which the Greeks mistook for feathers, and have in consequence of it added wings to his feet. The Jews used to carry boughs of the same tree at some of their festivals; and particularly at the celebration of their nuptials: and it was thought to have an influence at the birth. Euripides alludes to this in his Ion; where he makes Latona recline herself against a Palm tree, when she is going to produce Apollo and Diana.

In how great estimation this tree was held of old, we may learn from many passages in the sacred writings....