A New System; or, an Analysis of Antient Mythology. Volume I. 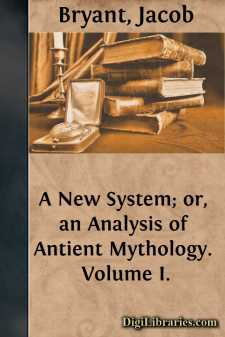 The earliest authentic account we can obtain of the birth of this learned and celebrated writer, is from the Register Book of Eton College, in which he is entered "of Chatham, in the county of Kent, of the age of twelve years, in 1730,"—consequently, born in 1718.

Whence a difference has arisen between the dates in this entry, and the inscription on his monument, hereafter given, we are unable to explain.

The two royal foundations of Eton, and King's College, Cambridge, justly boast of this great scholar and ornament of his age. He received his first rudiments at the village of Lullingstone, in Kent; and was admitted upon the foundation, at Eton College, on the 3d of August, 1730, where he was three years captain of the school, previous to his removal to Cambridge. He was elected from Eton to King's College in 1736; took the degree of Bachelor of Arts in 1740; and proceeded Master in 1744.

He attended the Duke of Marlborough, and his brother, Lord Charles Spencer, at Eton, as their private tutor, and proved a valuable acquisition to that illustrious house; and, what may be reckoned, at least equally fortunate, his lot fell among those who knew how to appreciate his worth, and were both able and willing to reward it. The Duke made him his private secretary, in which capacity he accompanied his Grace during his campaign on the continent, where he had the command of the British forces; and, when he was made Master-General of the Ordnance, he appointed Mr. Bryant to the office of Secretary, then about 1400l. per annum.

His general habits, in his latter years, as is commonly the case with severe students, were sedentary; and, during the last ten years of his life, he had frequent pains in his chest, occasioned by so much application, and leaning against his table to write; but, in his younger days, spent at Eton, he excelled in various athletic exercises; and, by his skill in swimming, was the happy instrument in saving the life of the venerable Dr. Barnard, afterwards Provost of Eton College. The doctor gratefully acknowledged this essential service, by embracing the first opportunity which occurred, to present the nephew of his preserver with the living of Wootton Courtney, near Minehead, in Somerset; a presentation belonging to the Provost of Eton, in right of his office.

Mr. Bryant was never married. He commonly rose at half past seven, shaved himself without a glass, was seldom a quarter of an hour in dressing, at nine rung for his breakfast, which was abstemious, and generally visited his friends at Eton and Windsor, between breakfast and dinner, which was formerly at two, but afterwards at four o'clock. He was particularly fond of dogs, and was known to have thirteen spaniels at one time: he once very narrowly escaped drowning, through his over eagerness in putting them into the water.

Our author must be considered as highly distinguished, beyond the common lot of mortality, with the temporal blessings of comforts, honour, and long life. With respect to the first of these, he enjoyed health, peace, and competence; for, besides what he derived from his own family, the present Duke of Marlborough, after his father's death, settled an annuity on Mr. Bryant of 600 l. which he continued to receive from that noble family till his death....